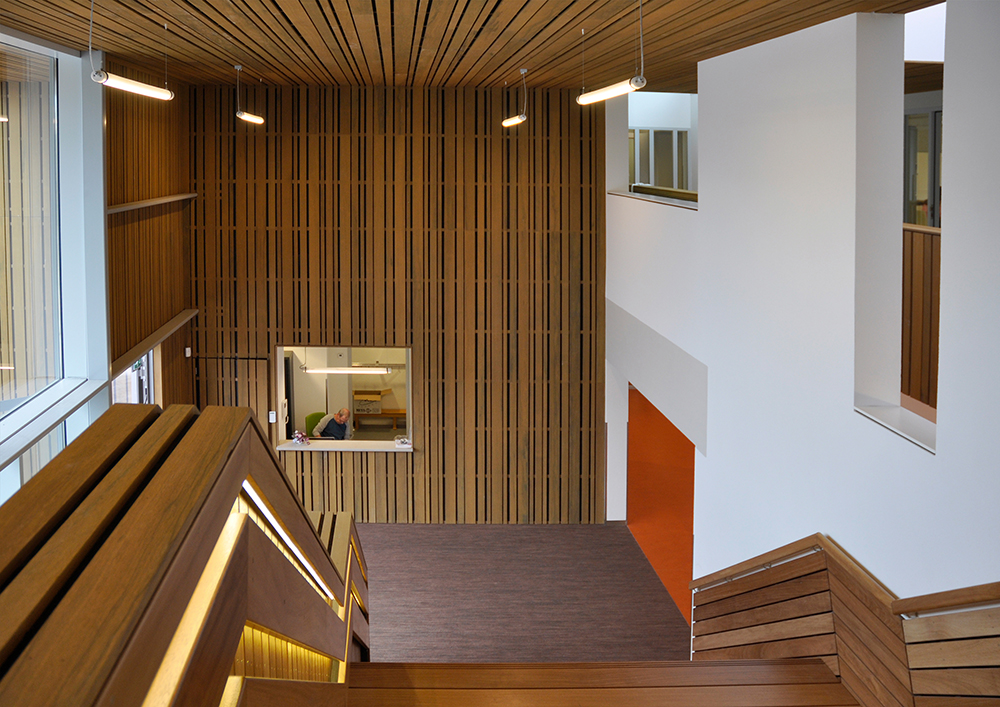 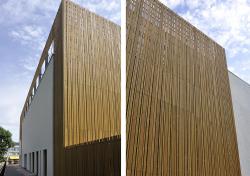 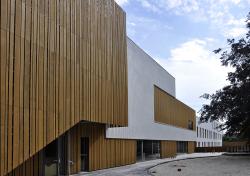 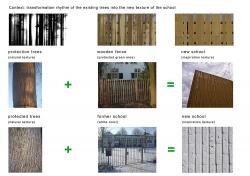 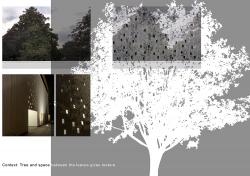 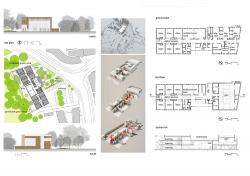 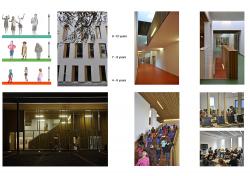 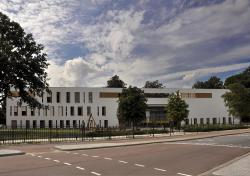 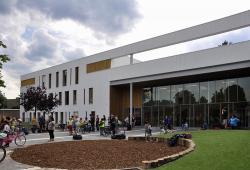 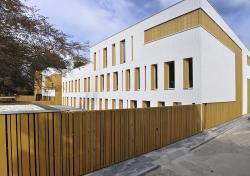 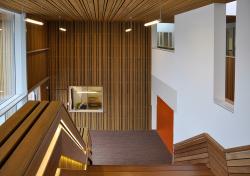 This is a special primary school because there are 5
different groups of users who work together in one
building, and use the facilities together for education,
care, sports and neighborhood facilities. It consists of 16
classrooms, 3 groups for a daycare,1 group for extra-
curricular activities, 1 nursery school/kindergarten and
one gym.

In the current project we looked for a connection to the
old school, because people living around the school also
intrinsically valued the previous school.
The white colour of the brick façades in this project is a
direct reference to the same color of the previous school.
The bricks were laid vertically in order to approach the
tree bark (texture) effect of the monumental trees which
also influenced the design process. The texture and color
of the facade refer to and connect to the context. The
bricks are produced in the vicinity of the site in order to
reduce the effects on the environment, so that no bricks
are imported from another region or country.

The spatial core/open space of the building in the middle
of the school is derived from the existing school and also
forms the link where the school's different users meet.
This is literally the connection between the left and right
side of users and the core of the building contains the
flexible spaces for general use.
We also ensured in the planning that several monumental
trees are an integral part of the site plan we designed.
Lines of the facade elements of the previous school are
recalled in the lines of the playground paving.

The spatial characteristics of the existing school are
recalled in the new design. At the entrance to the hall, a
core/open space is created with a wide staircase leading
to the first floor.

We took the influential protected green area to the north
and the monumental trees as a basis for designing the
windows through the oblique timber jamb. This gives the
viewer a focussed view of the green and the timber is
experienced in the oblique jamb.

The founder and owner of UArchitects, Misak Terzibasiyan, is personally and professionally focusing on an international context as well as on the influence of cultural themes. This is mainly based on his ethnical background, whereas Misak Terzibasiyan was born 22-09-1964 in Helsinki (Finland), his mother Finnish and his father Armenian. He studied at the University of Technology in Eindhoven (The Netherlands) on the department Architecture, Building Technology and City Planning. He has been working at international architectural offices before founding UArchitects.

2016
•Winner of American Architecture Prize, Bronze in the category education with the School ’t Hofke