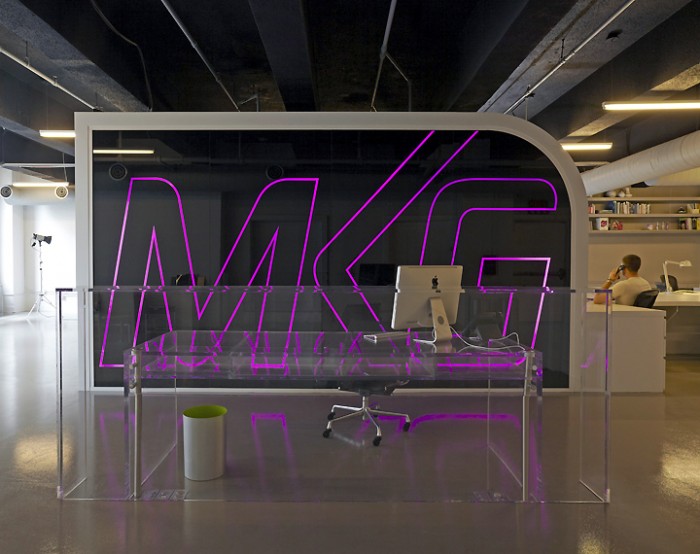 THE SPACE BEFORE RENOVATION
The space to be renovated had been subdivided into many small offices with no natural light or connection to the spaces around them. A typical SoHo commercial space -- elongated with windows on only two sides -- it was originally intended to be an open factory that housed large machinery and equipment. The architectural intent of this project was to restore the space to its original unity of function, letting the natural daylight fill the entire space. The mechanical system was extensive, so to deliver air to each small office. The possibility of the system’s reuse provided obvious budgetary advantages. The mechanical ducts and fan coils, once exposed, were purposely left in place, uncovered, as its massive network of ductwork and equipment provided a visual expression of the interconnectivity of the space. Excessive ductwork distributing air to the many small rooms, was, of course, removed.

CLIENT NEED FOR “CONDUCTIVE” SPACE
MKG is a young, dynamic, experiential marketing company that delivers highly creative promotional events for amazingly creative clients -- Coca-Cola, Vitamin Water, MTV, to name a few. In keeping with their delightful, imaginative client work, the designed space needed to keep visitors wondering what was coming next as they walked the office’s entire city block from the elevator entrance close to Broadway (photo left) to the principal’s office overlooking Mercer St. (photo right). The principal had one overarching design request: The new office must create a “conductive” workspace where the entire team can work collaboratively, bouncing ideas in continuous flow. Further, as a very young company, the client also requested that the architect and general contractor meet a tight budget, and strict design and construction schedules. In fact, the office opened 10 weeks after demolition began, as promised.

“SPINE” ARCHITECTURE AS CONDUCTIVE NEXUS
Luca Andrisani Architect’s “spine” structure anchors and conjoins individual workstations along a nexus of gathering places, enabling the creative team to transmit their breakthrough ideas, brainstorms, and insights while providing immediate feedback to their ever-evolving collective notions – developing memorable experiential events that satisfy their clients’ most pressing image-building and promotional requirements. The open, collaborative architectural spine structure enables the team to compress the cycle time between client request and corporate response through warp-speed communication and spontaneous interchanges.
As the elevator door opens onto the 4th Floor, an over-sized Marquee with logo over black mirrors at the reception area connects “MKG” with “show business” – creating the visitors’ first impression. An over-sized transparent Lucite reception desk disappears, leaving the entire marquee visually whole. From the Marquee on, two clusters of desks, carved from a central spine, position the marketing and operations teams in two expansive open areas in visual alignment with a café, an open projection theatre, a small, and a large conference room, a private office enclosed in glass, an administrative office area, and finally, the principal’s office. Similar to the human spine, the desks clustered in the two main work areas are connected like nerves to the main brain in the principal's office -- the natural conclusion of the spine – all the way to the reception area where the spine originates, facilitating an experience of immediate connection. Small alleys along the spine allow movement from one side to the other. The large conference room is a glass box set strategically along the spine on an angle, visually open on almost all sides. At the front end of the spine, the open area with the best view of Broadway provides a multi-purpose gathering place, enabling MKG to host events, invite large gatherings, perform castings, etc. Endless shelves accessible by a sliding ladder, and wall-hung countertop desks run along one wall, add dynamic elements that make, yet unimaginable, expansion possible. Ceiling limitations vanish from sight, thanks to the uniform black-paint treatment of the beams and ceiling surfaces. MKG’s unique and ready quirkiness manifests in such notable features as a nostalgic photo booth, a warm café with a full-wall blackboard on one side and a full-wall bulletin board on the other, striking art choices, and vibrant colors artfully placed throughout the open, flowing office. The pulse of creativity is visceral.

Founded in 2007 by Luca Andrisani, Luca Andrisani Architect represents a new generation of architects with an artistic interest in the craft and juxtaposition of timeless, unconventional, and cutting edge materials. The firm's conceptually designed environments balance intrigue with sustainable function and beauty. With a strong belief in listening as a guiding principle, Luca Andrisani Architect works with clients on projects of all scales and scopes to offer innovative solutions tailored to each individual project.