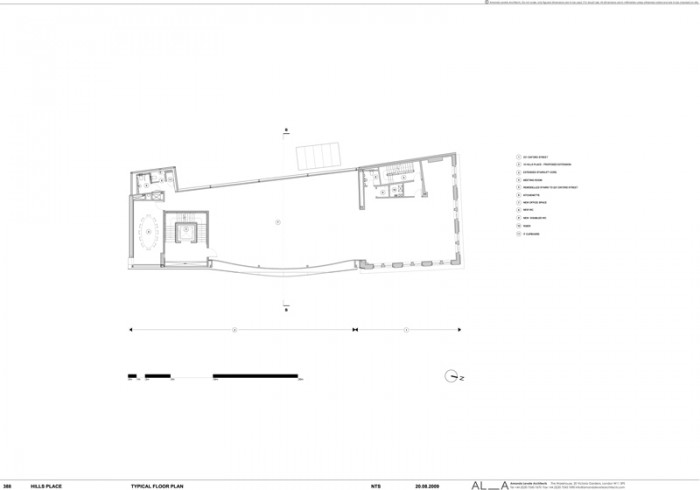 Many narrow streets and alleyways off Oxford Street, London are currently misused and underdeveloped. These under regarded areas are ideal not only for improvement, but also for relatively unconventional design opportunities. Our proposal acknowledges this by providing an architectural intervention that subtly draws attention to the building through the intrigue of a sculptural façade. Inspired by the art work of Lucio Fontana large glazed areas orientated towards the sky are slashed into the façade, maximising the natural light available in this narrow street.

This sculptural form is achieved using a system of aluminium profiles used in the production of high quality, ship hulls. The facade is fabricated using curved 140mm wide aluminium profiles that are connected together on-site, using a tongue-and-groove system ensuring water-tightness and construction efficiency. The metallic silver finish is a high performance durable paint typically used on super yachts. The use of self cleaning glass and an ingenious detail of hidden gutters within the eyelids ensures the facade remains low maintenance.

The ground floor is fronted by a bespoke laminated glass in which is sandwiched a stainless steel mesh and semi opaque interlayer over a dichromatic film. This is lit from behind, using fibre optics to generate a coloured moiré pattern providing dynamic visual interest and a feeling of depth to what would otherwise be a blank wall.

Award-winning architect Amanda Levete, together with directors Alvin Huang, Kwamina Monney and Ho-Yin Ng has formed Amanda Levete Architects on a strong foundation of established and new projects with a reputation for work of originality and integrity. The ethos of the office is rooted in design research and a commitment to exploring the transformative potential of space. Developments in digital fabrication have allowed the office to challenge conventional notions of form and space alongside the continued value placed on hand-drawings and hand-crafted models.

Amanda Levete Architects’ talented multi-national team of architects, designers, graphics specialists and engineers works at the intersection of design, technology and materiality. Their collaborative approach to the design process extends clients’ ambitions for their projects and produces groundbreaking work. The office's portfolio includes the redevelopment of media giant News Corporation’s headquarters in east London to create a campus for its UK operations housing The Times, Sunday Times, News of the World and the Sun newspapers, Dow Jones, Harper Collins, MySpace and 20th Century Fox.

In Thailand Amanda Levete Architects has been commissioned to design a resort and a collection of villas for private investors and in Bangkok a 1.5 million sq ft hotel and retail development for Central Retail Corporation. It recently won a competition for developer Londonewcastle to design a complex mixed-use development in East London on the basis of an innovative analysis of the urban context. Planning consents have also been granted for a house in Dublin and the remodelling of a Listed building in Knightsbridge London.

The office has several projects currently under construction including Spencer Dock Bridge in Dublin, a subway station in Naples in collaboration with artist Anish Kapoor, as well as offices in Oxford Street, London and a City Academy in Southwark.

As an extension of its design research agenda, the office uses the design of furniture and objects to explore architectural ideas and test material possibilities at a smaller, more intimate scale and collaborates with materials manufacturers to push the boundaries of their fabrication techniques. Amanda Levete has a long-standing relationship with Established & Sons to design furniture, including the iconic Drift bench. Amanda Levete Architects’ Corian Super-surface Lounge installation showcased during Milan Design Fair in April 2009 and the London Design Festival September 2009.

The formation of the new office follows the end of Levete's 20 year partnership with the late Jan Kaplicky at the influential Future Systems. One of the most innovative practices of its time, Future Systems completed award winning and internationally recognised buildings including Selfridges department store in Birmingham and the media centre at Lord's cricket ground which won the prestigious Stirling Prize.