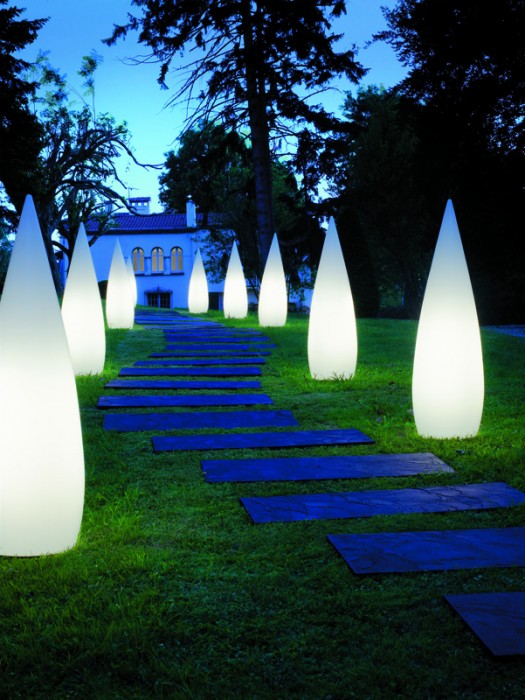 Natural light in nature
The Kanpazar light emulates nature with a modern twist. In fact, according to its designer, Jon Santacoloma, its shape and name come from a large pine tree that crowns the Alto de Kanpazar, an exceptional landscape located in the Basque region of Guipuzcoa, Spain. Inspired by these natural vistas, Santacoloma developed the gentle form of the Kanpazar.

The form is manufactured in neutral polyethylene with a smooth surface and is illuminated throughout by two 55W (2G11) fluorescent lamps. The fixtures scale, form and illumination emit both a calming glow and a feeling of serenity derived from the surroundings it was created from. It stands at a height of 58 inches with a base diameter of 17.5 inches or 69 inches tall when attached to its optional weighted base.

It?s very easy to adapt the Kanpazar to any situation or setting using its three versions: portable, fixed or in a weighted base reminiscent of a planter pot. These characteristics make it perfect not just for all types of exterior landscaped spaces, but also for city settings, such as ample lounges and waiting rooms to which it infuses a more spontaneous charm.

Jon Santacoloma is the soul behind Ideilan Design. His professional career started shortly after earning his degree in business science – with a specialisation in marketing – from the Universidad Comercial de Deusto (Deusto Business University) in 1996. One year later he was awarded a public scholarship at the DZ Design Centre for a three-year course in industrial design. He later extended his studies at De Montfort University in Leicester, U.K., where he earned a B.A. degree (with honours) in Product and Furniture Design.
This knowledge and training have greatly influenced his career. He has collaborated with the University of Oviedo, the University of Aviles and Mondragon University as a professor and project supervisor. He has also taught and supervised in the Design Management Masters programme offered by the DZ Design Centre, in collaboration with the Basque Country University.
He has also been an outside expert in industrial design at the UoW – University of Wales since 2008, and maintains ongoing relations with a number of different technology centres. He is currently teaching at the University of Deusto (DBS).
Jon Santacoloma’s work has been recognised by, among others, the AEPD (Asociación Española de Profesionales del Diseño, [Spanish Association of Design Professionals]) with their industrial design prize in 2006. He has also written a number of articles related to the role of design in a company, its management and its contribution to sustainable competitiveness.