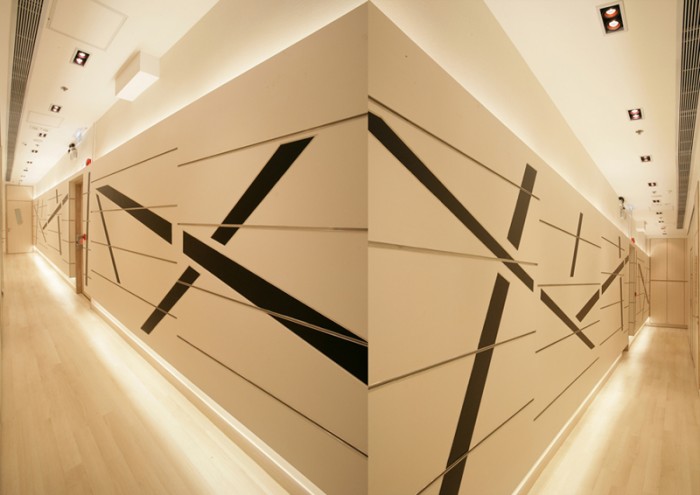 <Response to the Region?s Social Needs>

As each of the Youth Centre for HKFYG has a unique quality and theme for different location's need. The one at Verbena Heights, Tseng Kwan O is responding to the needs and profiles of the inhabitants around the region - a place of Performing Arts.

The site is a double-storey spaces in a linear form. The designs aim to divide the linear form into Black & White Gallery at the left-hand side leading from ground floor level until the Gallery reaches the first floor level linked by a vertical atrium and semi-translucent staircase. On the other hand, the right-hand side is conceived as 4 colourful cubes leading to a mini-performing theatre.

The Black & White Central Staircase defines the White Colour when ascending and Black Colour when descending.

The Interlocking Space defined in the first floor binds the Lightwell, Central Staircase and the core practising Studio for various performing Arts together which allows maximum configurations for different performances and practices.

The Black & White Gallery wall further extended to the corridors of the drawing studios at first floor level to echo with the Gallery at ground floor entrance.

The Theatre features staggered panels that run continuously from wall to ceiling to unfold the concealed lighting for multi-functional performances in all seasons.