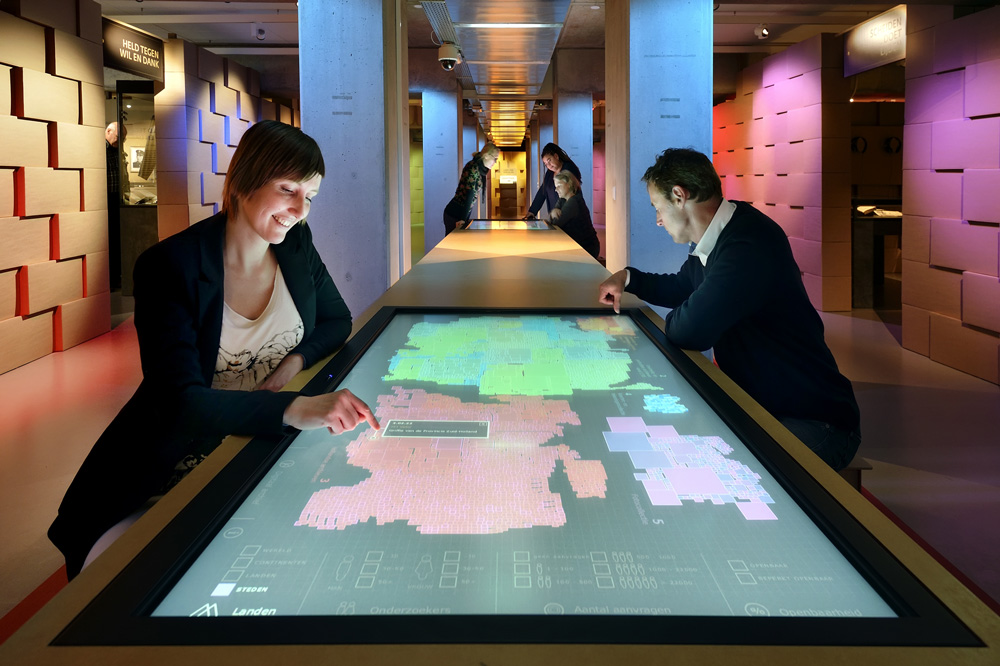 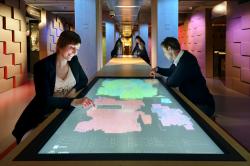 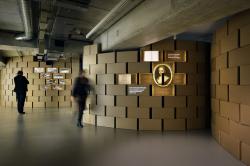 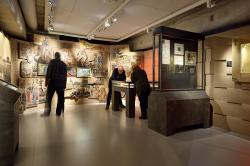 In 2013 the Netherlands National Archives inaugurated its new exhibition center, underlining its ambition to be the chief repository of Dutch history. The Archives proposed to tell 11 stories by engaging 11 artists, filmmakers and performers to interpret them. To this end Todd van Hulzen and Studio Louter created “The Palace of Memory”.The exhibition design includes both permanent and temporary elements. The documents and objects which support the stories were given pride of place in new permanent glass cases, while digitized archives were made discretely available at new consoles.

The challenge of the temporary part of the exhibit was to create an aesthetic unity between heritage collections, digital collections, didactic content, artistic content and also the building itself: an unfavorably vast former archival depot. Our chief conceit was to take the humble archival box and turn it into both a construction element and a metaphor for the entire archive. We conceived a sort of castle of stacked boxes and heavy cardboard elements, consisting of 11 “theaters” joined around a central “courtyard”. The relatively light boxes accorded a volume to the space that would otherwise be unaffordable. The neutral feel of the cardboard worked to tie the myriad elements and themes of the various stories into the whole. Even in the digital content the box was employed as a symbol. Color, which was strategically allotted to each story, was achieved with colored light alone. And naturally, the cardboard is recyclable.

The “palace”also allowed for an entire allegorical framework which employed elements from Borges’ “Library of Babel” to Calvino's “Invisible Cities”. Inspired by this given, the National Archives engaged a nationally renowned author to write a book-length parable employing the same trope as the exhibit: stories are the building blocks of identity.