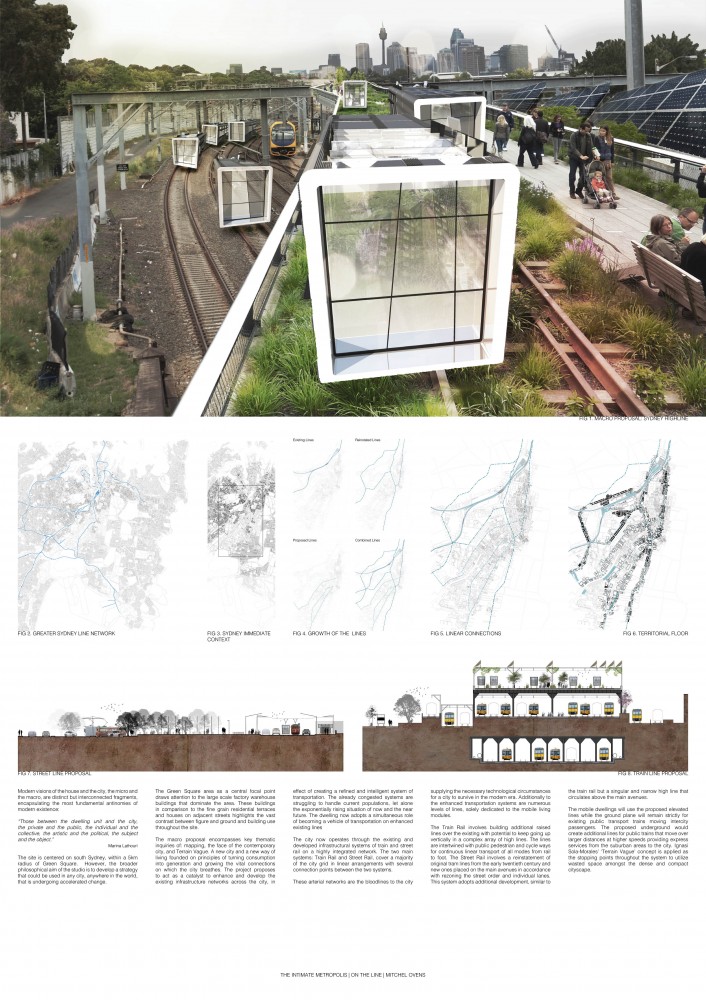 Modern visions of the house and the city, the micro and the macro, are distinct but interconnected fragments, encapsulating the most fundamental antinomies of modern existence:

“Those between the dwelling unit and the city, the private and the public, the individual and the collective, the artistic and the political, the subject and the object.”
Marina Lathouri

The site is south Sydney, However the project develops a strategy that could be used in any city, anywhere in the world, that is undergoing accelerated change.
The Green Square area as a central focal point draws attention to the large scale factory warehouse buildings that dominate the area. These buildings in comparison to the fine grain residential terraces and houses on adjacent streets highlights the vast contrast between figure and ground and building use throughout the site.

The macro proposal encompasses key thematic inquiries of: mapping, the face of the contemporary city, and Terrain Vague. A new city and a new way of living founded on principles of turning consumption into generation and growing the vital connections on which the city breathes. The project proposes to act as a catalyst to enhance and develop the existing infrastructure networks across the city, in effect of creating a refined and intelligent system of transportation. The already congested systems are struggling to handle current populations, let alone the exponentially rising situation of now and the near future. The dwelling now adopts a simultaneous role of becoming a vehicle of transportation on enhanced existing lines.
The micro proposal encompasses key thematic inquiries of: the art of inhabitation, the minimum dwelling, and scale. Specifically designed and developed around the ideas of flexibility, adaptability, allowing for the art of inhabitation and minimal programmatic requirements, the dwelling is split into four principle modules with each housing the components of dwelling.