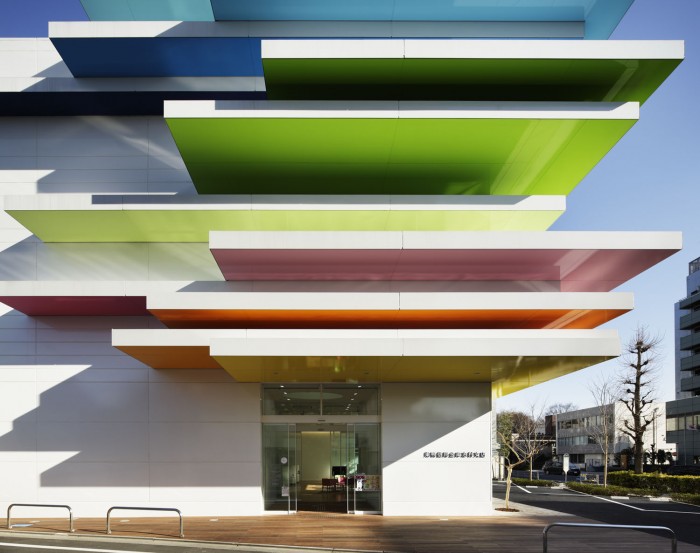 Sugamo Shinkin Bank is a credit union that strives to provide first-rate hospitality to its customers in accordance with its motto: “we take pleasure in serving happy customers.” Having completed the design for branch outlets of Sugamo Shinkin Bank located in Tokiwadai and Niiza, Emmanuelle was also commissioned to handle the architectural and interior design for its newly rebuilt branch in Shimura.
When she visited the site for the first time, it was very noisy, there was a big street with a lot of cars, high buildings etc..and felt naturally to look up, towards the sky. So she decided to create a building where people naturally look up, in order to breathe and refresh.

A rainbow-like stack of 12 colored layers, peeking out from the facade to welcome visitors. Reflected onto the white surfaces, these colors leave a faint trace over it, creating a warm, gentle feeling. At night, the colored layers are faintly illuminated. The illumination varies according to the season and time of day, conjuring up myriad landscapes.

Upon entering the building, three elliptical skylights bathe the interior in a soft light. Visitors spontaneously look up to see a cut-out piece of the sky that invites them to gaze languidly at it. The open sky and sensation of openness prompts you to take deep breaths, refreshing your body from within. The ceiling is adorned with dandelion puff motifs that seem to float and drift through the air.