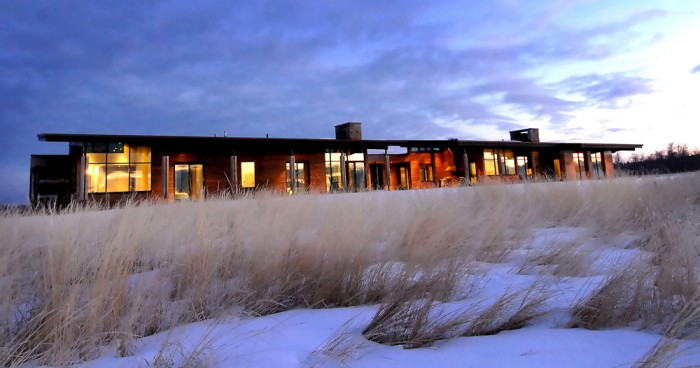 Taking cues from its flat open surrounds, the EarthWall 2
Residence is as much a nod to its plane-like site as a
product of it. As an unabashed groundscraper, the home’s
sod-covered roofline and low sloping sheds reinforce the
horizontality of the site while deemphasizing the 6,000-
square-foot volume. Composed of the Architect’s patented
“EarthWall” (post-tensioned rammed earth construction),
the earthen walls literally rise from the soil that was used in
their construction and relate the building to its natural
environment while absorbing solar energy. The rammed
earth walls also create datum lines acting as part of the
organizing principal of the floor plan.

Transparency of design is achieved on multiple levels:
Large glass elevations that open the structure to the
outdoors are paired with continuous poured concrete floors
that seamlessly flow from patio to interior, blurring the
inside/outside distinction. An environmentally responsive
design, the structure is oriented to maximize solar gain
through its energy efficient windows, thermal mass walls,
and the concrete floor slabs that absorb solar radiation.

The building’s passive solar design is coupled with other
green energy features such as a closed loop ground source
heat pump that circulates water through 7’-0” deep heat
fields at both ends of the house that utilize the earth’s
energy to heat and cool the house. In addition, reclaimed
building materials such as douglas fir (from an old barn)
used for soffits and ceilings throughout the house, as well
as reclaimed stone (from an old school house) used for the
fireplaces enforce the client’s desire to reduce the
environmental impact of the building footprint.

Simplicity of design combined with naturally aging materials
and integrated plantings make this house fit beautifully
within the changing seasons of its environment.