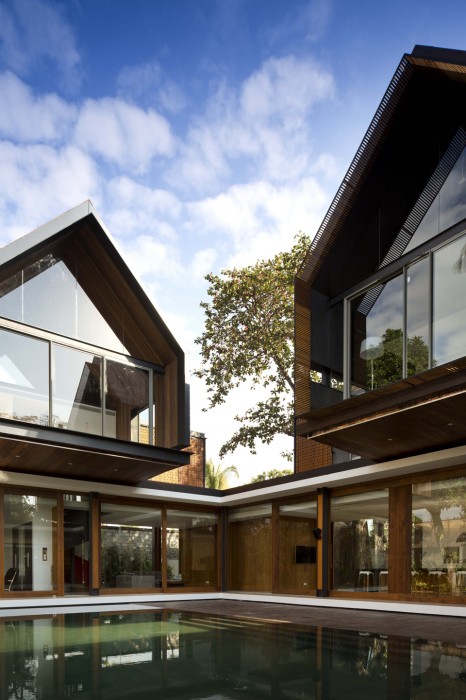 THE AESTHETIC CHALLENGE
The challenge of this project was to un-balinese the typical Balinese villa form—both in terms if image and function—while retaining the intangible essence of the place. The idea was to question notions of the typical home and to un-do conventions in search of a new domestic idiom. The notion of the home, the house, and the dwelling was dismantled (the typical courtyard house re-thought), re-examined (the common thatch-roof elements substituted), and re-constructed (rather than traditional timber, steel was used extensively) into a new image and living environment.

THE FORMAL MANIPULATION
Questions about how a house functions were asked. The idea here was to create a wandering, endless, fluid, common living space that meanders through the site, in an s-shape manner. The s-shape form provides for an entry court in front and a private water court in the rear. The idea
was to create a series of spaces without definite borders which fosters a communal living experience downstairs. Access to private quarters are then made through separate individual staircases up to separate elevated ‘barns’ upstairs. Effectively, the barns become 3 separate little villas within the house. The barns sit on an upper garden, the ‘piano nobile’, are-constituted ground plane.

THE CONSTRUCTION EXPERIENCE
As building conventions in Bali defer from those abroad, constructing the house was a challenge in every aspect. Drawings were un-drawn as per site conditions, detailing were re-thought according to local expertise, materials substituted due to local limitations. These ‘negatives’ paradoxically enhanced the eventual product. Due to lack of provisions in Bali, elements of the house had to be constructed elsewhere then shipped to Bali. For instance, the steels staircases were manufactured in Jakarta, windows Surabaya, and aluminum cladding again from Jakarta.