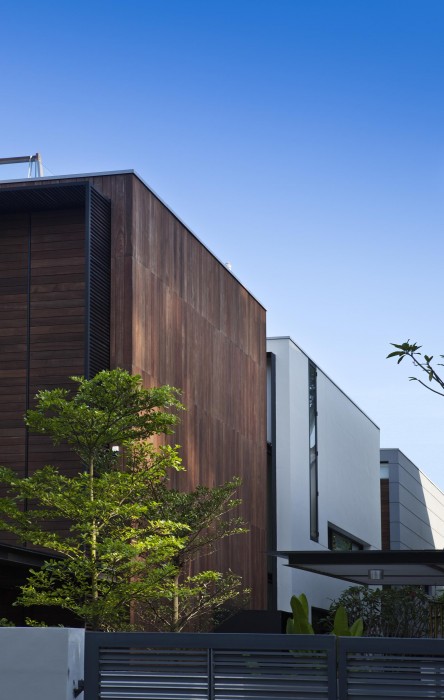 SITE STRATEGY (is it possible not to do the obvious?)
The feeling for the site was a ‘counter-intuitive’ one. The house was made even narrower within an already narrow site by turning the semi-detached house into detached house with setbacks on both sides. This site strategy increased the demands of the design.
AESTHETIC CONCEPT (is it useful to use a form from another discipline?)
The house is inspired by music composition. For instance, the composition of the house in divided into 3 movements, much like a symphony or sonata. And in order to create a coherent overall composition, a ‘leitmotif’ (in this case 3 recurring spiral staircases) was invented and worked into the spaces of the house.
FORMAL CONCEPT (is it alright to subdivide a house into 3?)
The formal strategy was to create a house in 3 cubic forms. The separate cubes or ‘movements’ are connected by bridges and linked by courtyards to heighten the distinct separations of the volumes. Effectively, there are 3 little houses within the house with light a views on all 4 sides of the form.
PROGRAMMATIC CONCEPT (is it sensible to separate a dwelling into parts?)
The idea was to express each of the different functions of the house in a separate cube. For instance, the public areas are contained in one cube, the little daughters in their own ‘house’, while the master-bedroom functions are contained in another.
IDEAS FOR MATERIALS (is it ok to use many materials?)
In order to accentuate the character of each of the movements, three different materials and colours were deployed. Timber cladding was used for the first cube, white smooth plaster for the second, and rough grey tones for the third.