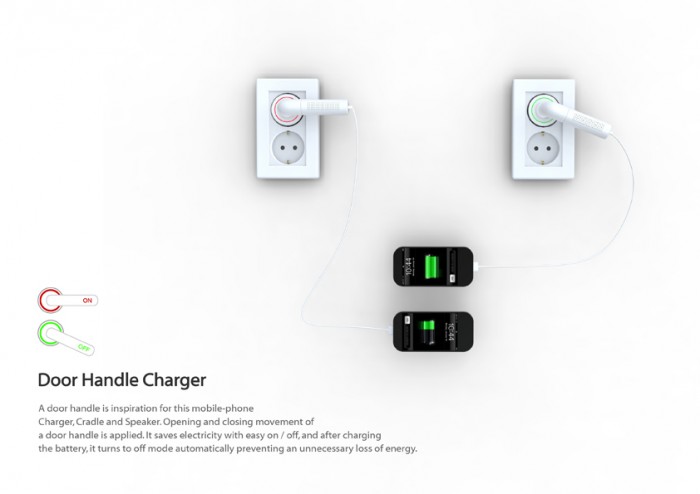 Concept :
A door handle is inspiration for this mobile - phone Charger, Cradle and Speaker. Opening and closing movement of a door handle is applied. It saves electricity with easy on / off, and after charging the battery, it turns to off mode automatically preventing an unnecessary loss of energy.

Background :
We think the consumption of electricity stops when we turn it off but it is continuously consumed as long as we don't unplug it because of standby power.

What is Standby Power?
It is electricity which runs into appliances while they are idle but plugged. It is small but it is continuously consumed.
It covers 11% of a home’s entire electricity consumption.
It is equivalent to the amount of electricity produced by one nuclear power plant in Korea. If it is not consumed, each home can save 306kWh per year which costs 36,700 won (KRW. Korean Money). The average monthly fee and the cost-saving will add up to 600 billion won (KRW) per year.

How to Use Charger : ON
It saves electricity with the easy on / off.

How to Use Charger : OFF
Switches to off mode automatically preventing unnecessary loss of energy.

Cradle and Speaker Use :
The speaker part with cradle function swivels 90 degrees and conveniently works in any outlets such as built-in type or power bar type.