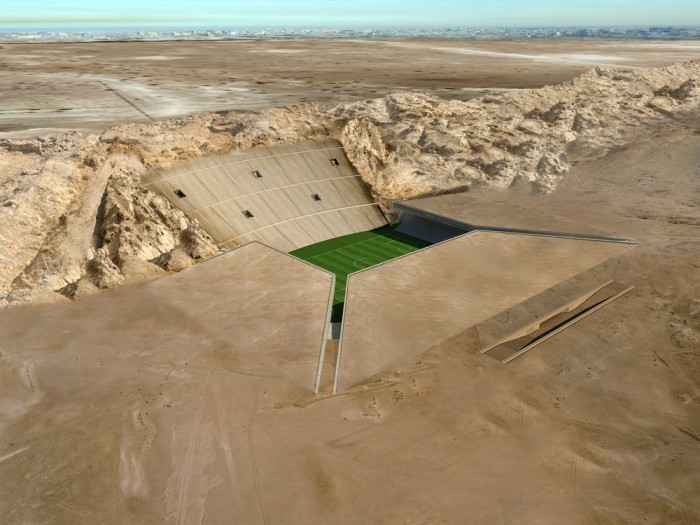 Set in the Al Ain desert landscape, the Rock Stadium celebrates the game it hosts as much as it celebrates the site in which it lays.
Recognizing the powerful language of its surrounding and intelligently approaching the issue of scale and the intermittent use of the stadium architecture, the project sinks its 200,000m² structure into the ground and turns the Jebel Hafeet rocky mountain into one of its main features. Inspired by the first greek amphitheatre, the project creatively works with the topography and relies on a series of emerging planes to mold the space and help cater for the 40,000 seats which it provides. Its grand entrance into the underground creates a monumental approach to the space of events, similar to the imposing entrance of the Temple of Anahita.
Working with the existing site and using the local materials, the architects find themselves playing with a carefully studied palette of rock and sand that not only lead to the main façade/visual panels system adhering to the site but also create a more sustainable approach to construction and design where no material is forgotten or displaced and where all is reused. Careful patterns are created with the recuperated stone, creating interestingly designed man-made strata patterns that emphasize the natural characteristic of the site.
Maximizing the use of on-site material, the visionary design of the Rock Stadium merges landscape and architecture, thus blurring the boundaries between the built and the natural and creating a space that allows the visitor to interact with the stadium activities as much as with the desert landscape itself.
This simple yet majestic design hides great achievements and brilliant experimentations with issues of scale, monumentality and locality, hence allowing the project to create a strong sense of place in an otherwise homogenous area of the vast expanding desert.