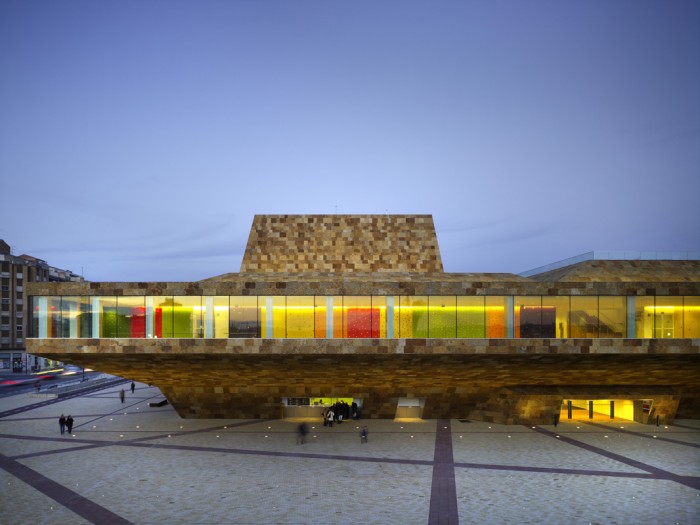 Just outside the centre of the city of Lleida on the banks of
the Segre River is La Llotja, a large theatre and conference
centre. Mecanoo regarded Lleida’s landscape (Catalan for
Lerida) an extraordinary backdrop for the horizontal
building. The mise-en-scene has been elaborated on three
levels of scale: as a link between river and mountain
landscape, balanced composition between river and city,
and with its cantilevers, as shelter from sun and rain.

The large stone building of over 37,000 square metres
appears to have sprung from out of the Spanish earth. The
building’s horizontal form provides a large garden on the
roof, while under the cantilevers begins a square for events,
with the stairs of the adjacent building serving as a tribune.
Materials ensure distinction and orientation in the interior.
The exterior is of stone. The interior is mostly of white
stucco. The region of Lleida is famous for fruit production.
The theatre has the semblance of an orchard with walls of
dark wood, within which, cut out trees of light. The colour
palette of fruit is a theme throughout the building and is
repeated in small details.