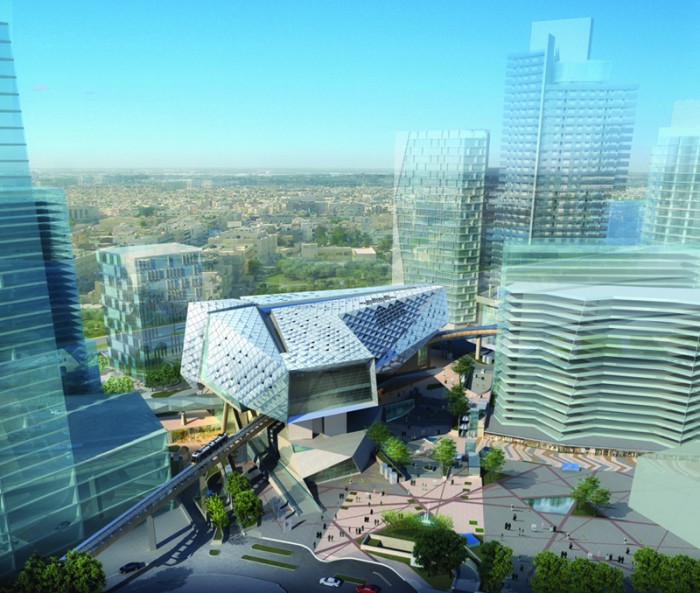 Museum of the Built Environment

The Museum of the Built Environment is a key public
building within the King Abdullah Financial District, a new
5,109,667 square-meter mixed-use urban community. Sited
on a large plaza bisected by a sunken Wadi—a pedestrian
park that flows through the district—the museum serves as
a primary transportation hub; housing a network of public
skywalks and a monorail station to connect the building to
neighboring sites. Exhibitions will interpret the historical
development of Arts and Architecture in the Arabian
Peninsula focusing on the role that social, economic, and
environmental issues have played in the region. Varied
program elements include a series of public spaces, street-
level retail, permanent and temporary galleries, a 150-seat
auditorium, a destination restaurant and an outdoor
terrace, administrative offices, a VIP Lounge, and
underground parking. The programmatic distribution is also
expressed in the massing by creating greater solidity and
opacity on the museum’s upper levels while maintaining
transparency on the lower public levels. Facade on the
upper levels is made of prismatic laminated glass panels
creating a varied textural quality and allowing daylight at
select controlled locations and reduce heat gain. The Saudi
Arabian world heritage sites of Madain Saleh and At-Turaif
inspired the museum’s formal concepts of erosion and
chiseling of crystal rock. Estimated date of completion is
2014.