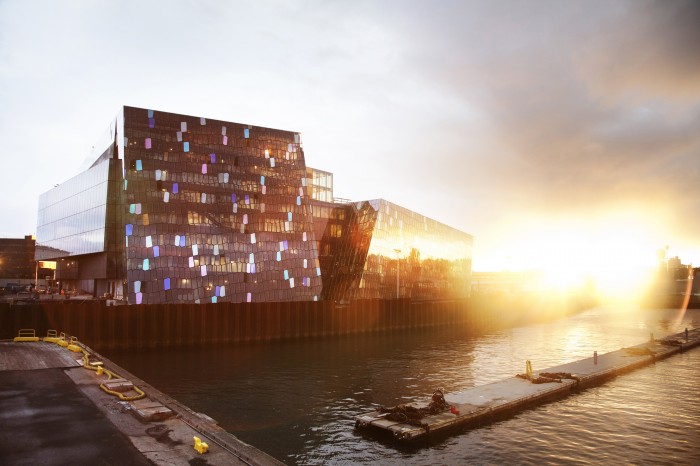 The Harpa Reykjavik Concert and Conference Centre in
Iceland is a new institution designed to host both public
and private events, united under one roof in an effort to
expand the city life in Reykjavik. The building gathers
inspiration from the northern lights and the dramatic
Icelandic scenery. Situated on the boundary between land
and the sea, the building stands as a landmark structure
reflecting both sky and harbour space .

The concert hall is the new home for the Iceland
Symphony Orchestra, and also features a diverse musical
programme, appealing to varying tastes and generating
exposure for the entire music scene in Iceland. The
Conference Centre is integrated seamlessly in the same
building and is flexible to accommodate a wide range of
events for both public and private affairs. The distinct
functions are tied together by the spectacular foyers,
shared circulation, and the dynamic facade that wraps the
building.

The facade –a crystalline lattice of glass and steel –was
designed by Olafur Eliasson in collaboration with Henning
Larsen Architects. The glass prisms capture the daylight,
mirroring the day and the seasons like “a calendar of
light”, and putting the surface of the building into
constant motion. The balconies in the main foyer offer a
spectacular view of the centre of Reykjavik, towards
Mount Esja and the glacier at Snæfells Jökull.

The 23900 m2 congress centre is part of a large
masterplan to revitalize Reykjavik’s eastern harbour.
Besides the Concert and Congress Centre, the plan
includes a hotel, fine arts academy, cinema, new urban
shopping street, as well as a number of residential and
commercial buildings along the fjord, expanding
Reykjavik’s centre by 85,000 m2. Henning Larsen
Architects has also built a new road connecting the
harbour to the city centre, reinforcing the connection
between Reykjavik and the eastern harbour.