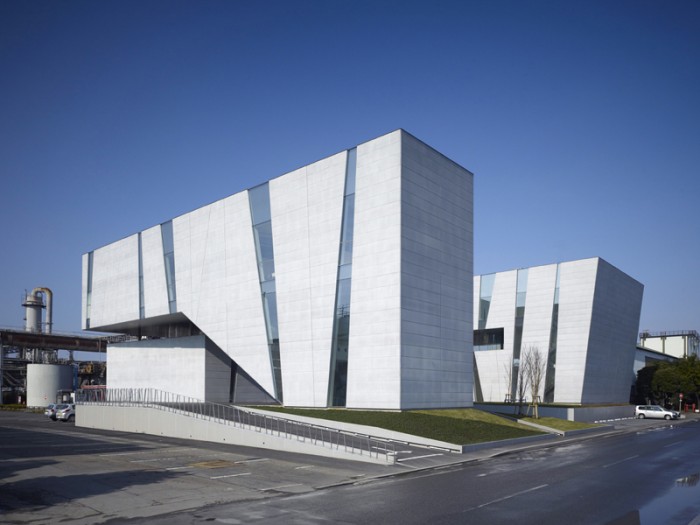 A "Spiral" fills the needs.
This building is a new chemical research laboratory for a world leading materials development corporation. It is on a large site in an industrial are near Tokyo bay.
We responded to the request for “research efficiency” by using flexible experimental rooms where researchers can adjust their research space according to their needs. To the requests for “high security” and “comfort” we responded with high-security, and high-comfort offices and break areas throughout the entire building. We responded to the request for “symbolism” with symbolic architecture that helps promote the companies abilities to the world.
First, we horizontally aligned the main rooms: laboratories, an office, meeting rooms, an auditorium and a reception room along a common corridor and put the guest entrance and the researchers entrance at either end. By adopting a plan with a common corridor, the clients can freely select doorways and move partitions in the experimental rooms according to their needs. The security door is easily adjustable due to the linear shape of the plan and the separation of guest and researcher entrances.
Next, we transformed this linear plan in three-dimensions.
The office and the meeting rooms need the highest confidentiality, so these were separated from the linear plan. The linear plan spirals around the office and meeting rooms. As a result the office and the meeting rooms are untouched by other rooms on every side, horizontally. Vertically these rooms are in the centre of the spiral. Therefore the access to the experimental rooms on the upper and lower floors becomes easy. Additionally while these rooms have high-security the walls are transparent, giving a comfortable open-air atmosphere.
The break areas were made by widening the main corridor. As a result, researchers can take a break while changing rooms. In addition, the linear break areas spirals around the court yard. Therefore, this vertical plan allows the researchers to see the court yard from various points of view.

A “Spiral” meets symbolism.
The spiral shape responds to the three requests: “research efficiency”, “high-security” and “comfort”. Also, the spiral form becomes the key to the last request - “symbolism”.
We think that true symbolism of architecture comes from the architecture itself; designed through logical thinking. It's neither a simple “wrapping” nor pure imagination.
We hope this building, “Spiralab”, helps its researchers develop new materials through logical thinking and will advertise this concept to the world.