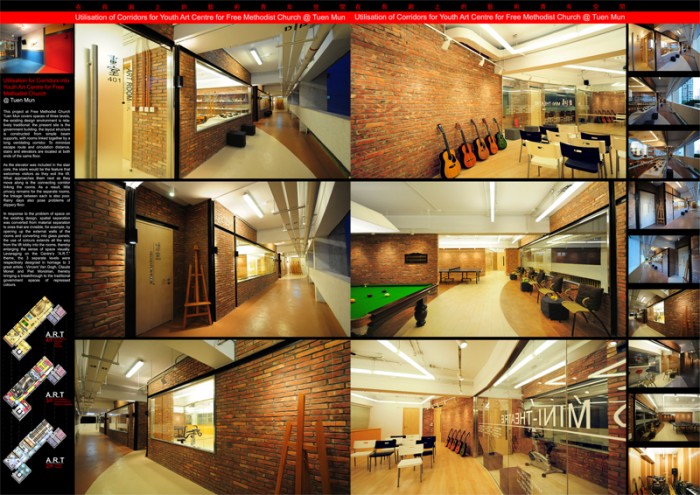 This project at Free Methodist Church Tuen Mun covers spaces of three levels, the existing design environment is relatively traditional: the present site is the government building, the layout structure is constructed from simple beam supports, with rooms linked together by a long ventilating corridor. To minimize escape route and circulation distance, stairs and elevators are located at both ends of the same floor.

As the elevator was included in the stair core, the stairs would be the feature that welcomes visitors as they exit the lift. What approaches them next as they move along is the connecting corridor linking the rooms. As a result, little privacy remains for the separate rooms, the linkage between each is also poor. Rainy days also pose problems of slippery floor.

In response to the problem of space on the existing design, spatial separation was converted from material separation to ones that are invisible, for example, by opening up the external walls of the rooms and converting into glass panels; the use of colours extends all the way from the lift lobby into the rooms, thereby enlarging the sense of space visually. Leveraging on the Centre’s “A.R.T.” theme, the 3 separate levels were respectively designed in homage to 3 great artists - Vincent Van Gogh, Claude Monet and Piet Mondrian, thereby bringing a breakthrough to the traditional government spaces of repressed colours.