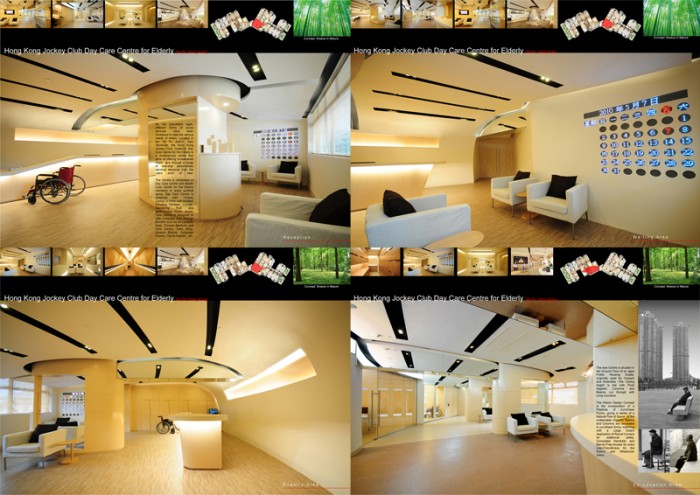 As the population ages, different forms of social services have been increased to meet the various needs of elders. Located in the Tai Po district, New Territories, the Hong Kong Jockey Club Cadenza Day Care Centre for the Elderly is a multi-service centre that aims at offering fundamental health care through a range of one-stop personalized services delivered from the users point of view.

The new Centre is situated in the Ground Floor of an aged Public Housing Estate, originally used for Carpark and Amenities. The Ceiling height is low with Thick Gigantic Columns and Beams, run through with Long Corridors.

The Interior Design Concept is the incorporation of a Plasticity of Curvilinear Forms, giving a sense of a Natural Flow of Space. All the undesirable Gigantic Beams and Columns are concealed in curvilinear forms, matching with a Large Extent Application of Round Corners for additional safety. Concealed Handrails and Barrier-Free Access for extra User-Friendliness for the Elderly and Wheelchair Users.

The major colour tone is natural off-white colour blending in with Light White Oak Timber. Lounge Leisure Area on the other hand is accentuated with Timber Shading.