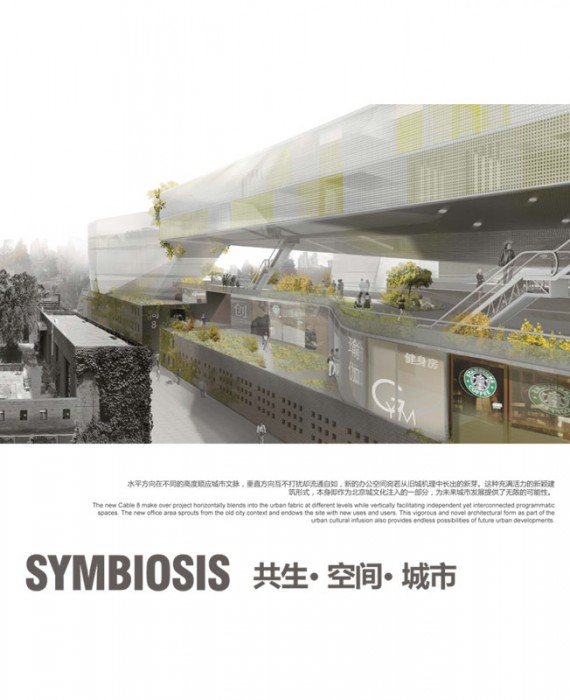 Cable 8 is located at the intersection of the old and the new Beijing city fabric- a marked area which witnesses the urban succession of past and modern. The east-west direction of the site is outlined by the China world shopping mall, Wanda plaza and the CBD under current planning; the north-south area is primarily occupied by factory warehouses and historical residential buildings. Within the context of these successions, in recent years, Beijing has encountered a series of complex challenges in urban design projects: the request of constructing more business districts to meet the ever increasing demand of office area and the requirement of historic preservation coexist; moreover, the need of creating friendly and low carbon public spaces cannot be ignored. Using the new to replace the old--this conventional pattern of urban development has destroyed most old city fabric, as a result, we consider the possibility of synthesizing the old city area by using the organizational framework of new city area to create a smooth transition of the old and new urban texture.
Based on this consideration, we decide to extend the new commercial area from the Wanda plaza to the industrial site, the new construct will span over the existing factory buildings whose structures remain intact; furthermore, a green space will be created to thread together the pre-existed and newly introduced architectural fabric.
While the existing architecture elevation and vegetation is preserved, a make over of the old plants is executed through removing part of the floor slabs and reinforcing the building structure. The reconstructed factory buildings are primarily designed to be a multi-functional art museum; its volume can be utilized to exhibit large scale artworks; it also programmatically complements the hectic commercial environment of that area. When promenading through the ramps which swirl around the walls, the visitors can acquire different interpretations of the artwork from varied heights.
The vertical circulation core spirals up and leads to the rooftop of the factory buildings—a green public space which includes restaurants, art boutiques and workshops. The original rooftop will be converted to an inter-connected terrace garden, which becomes a desired urban place for public interaction and contributes to the city green lung. Visitors of the museum from the lower part and the artists who work in the upper portion of the building can meet and communicate here. The pleasant scale of the terrace and its natural ambiance help to form the space into the circulation path of commuters and also as a recreational area for the surrounding residents.
The office area at the top blends in the east-west commercial context formed by the adjacent business districts. The original offices can be lifted up to this level in order to create a continuous circulation in the commercial environment. The green spaces between the elevated volumes become buffer zones for the public museum and the office area and keep them relatively undisturbed from each other. After the conversion, the scale of the synthesized street block is more similar to the ones of the newly planned surrounding districts; as a result, a smoother traffic flow can be achieved in the whole area.
Moreover, by taking the growing pattern of ivy into consideration, this project introduces this vegetation into the formation of the architectural spaces at areas such as museum entrance. The growing process of ivy enables the architecture to change seasonally and dynamically, thereby a more intimate relationship between people and nature is created. The vegetation retains the original character of the industrial site, and at the same time, as an intelligent architectural envelope, it helps to create more environmentally desirable interior spaces.
The new Cable 8 make over project horizontally blends into the urban fabric at different levels while vertically facilitating independent yet interconnected programmatic spaces. The new office area sprouts from the old city context and endows the site with new uses and users. This vigorous and novel architectural form as part of the urban cultural infusion also provides endless possibilities of future urban developments. While the Beijing urban boundary expands day by day, instead of blindly spreading out new constructions and demolishing the outdated architecture, this kind of architectural invention/intervention is calling for the palimpsest of history. Through thickening and preserving the historical urban texture and culture, the city is enriched and developed in a more sustainable and human fashion.