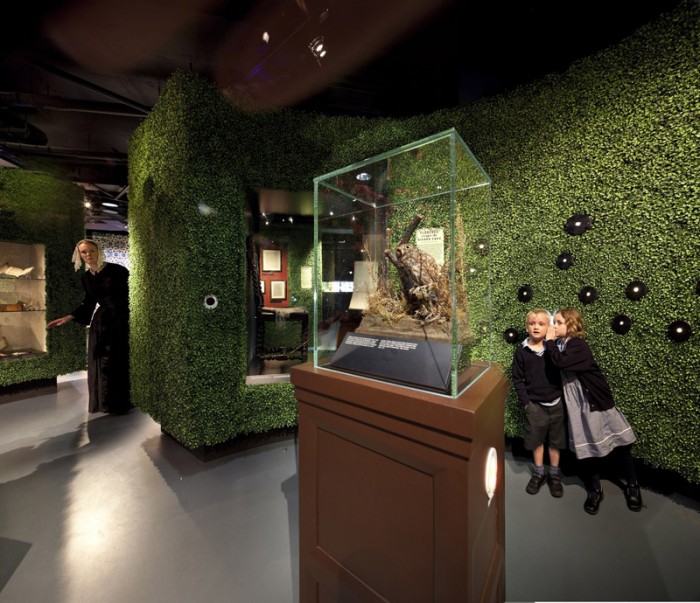 Kossmann.dejong designed the new interior for the Florence Nightingale Museum presenting her life and achievements in a multimedial way. Florence Nightingale was a living legend. In England she was immensely popular as ‘ The Lady with the Lamp’ – named after the lamp with which she walked her nightly rounds amongst the soldiers wounded in the Crimean War. Few know that she was a manager first and a caring nurse second. She was the driving force behind the professionalization of the nursing profession. Central to the design are three pavilions that dramatically highlight important periods in her life. A stethoscope enables visitors to access stories and quotes. By hearing her voice – spoken by an actress - one comes very close to Florence. Florence Nightingale's life can easily be divided into three episodes: her youth and background, the Crimean War period, and her later work and influence. Each period had its own pavilion with a different approach: The first pavilion (The Gilded Cage), designed as a rose-garden, symbolized her privileged Victorian youth and her struggle against stifling social conventions. The second pavilion (The Calling) is wrapped in Turkish tiles while the interior is lined with stretcher frames wrapped in bandages, marking the war in Crimea and how Florence and her team coped with the crisis in the military hospitals. The Victorian study and a paper bed installation in the third pavilion (Reform and Inspire) represented the last period and shows the other side of Florence, the reformer who campaigned tirelessly for health reform at home and abroad. The narrative approach comes from three perspectives: Nightingale herself, her environment and the time in which she lived. An installation in the middle of each pavilion represents Florence; her voice – imitated by an actress – brings every visitor very close. Her pronouncements and stories come within reach through a stethoscope. On the walls of each pavilion, her social environment comes to life through portraits and small slide viewers. The latter are also used on the outside and give views onto things such as the industrial revolution in 19th-century England. On the surrounding walls, a link is made with contemporary nursing practice: a kaleidoscopic overview of the development of nursing from Nightingale to today. This surrounds the permanent exhibition and continues to reinterpret Nightingale's story in a contemporary context.

Kossmann.dejong, exhibition architects, is an Amster¬dam-based multimedia design studio specializing in exhibition and interior design. The agency was founded in 1998 by Herman Kossmann (1958) and Mark de Jong (1960), both graduated in architecture at the Technical University in Delft. Kossmann.dejong has grown into an agency with over 20 employees. Alongside temporary and permanent museum interiors, the studio also designs interiors for visitors’ centers, clubs, hotels and large-scale events. The subjects of their exhibitions range from architecture, history of psychiatry and children’s books, art for teenagers and micro-organisms.

Kossmann.dejong is currently working on the new Maritime Museum in Helsingør (Denmark), the Historisches Museum Frankfurt (Germany), MicroZoo for Artis (the Netherlands) and the Maritime and Beachcombers Museum Texel (the Netherlands). The most recent projects the permanent exhibi¬tion ‘Laurens Church, a monument full of stories’ in the Laurenschurch in Rotterdam and a multimedia story about the UNESCO World Heritage Canal area in Amsterdam for Het Grachtenhuis.

In 2010 Kossmann.dejong, in cooperation with Frame Publishers, has published ‘Engaging Spaces, a valuable and timeless sourcebook for everyone interested in the field of exhibition design.