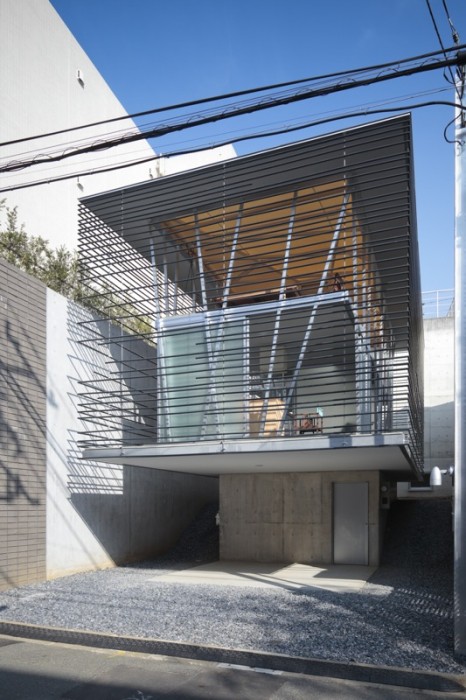 The Japanese word 'Hojo' had been originally used to describe the extent of a space in 1jo by 1jo, (1jo = about 3m) but later the word gradually started to refer to a building in such size and scale. In the course of Japanese traditional architecture, this small spatial unit became the starting point to produce a tea-ceremony room and ‘Sho-in’ space, and later it was developed as a daily living space of Buddhist monks with integrated garden. This house tries to resolve and reconfigure this traditional 'Hojo' in today's urban environment to secure and release the daily life physically and spiritually.
The site is surrounded by the adjacent houses and a retaining wall, which produces the precondition of internality from where some natural plants on the different levels are viewed. Into such a semi-enclosed space we inserted a pipe-screened translucent volume to define a loose territory which could be a weak flame. Through this screen the interior space expands outwards and the exterior comes near inwards simultaneously. Eventually this space can be felt both extensive and intimate. This mechanism of differentiation in distances is referred to ‘Shakkei’ method in Japanese landscape design which traditionally means borrowing scenery in the distance to combine with the nearby garden in front of the dwelling which are usually divided by a low wall. This wall acts to draw the scenery in the distance toward the front garden and also expand the front garden far away, finally combines them. The screen of 'HOJO' causes the same effect. In this way the uniqueness of 'HOJO' characterized with its nesting boxes structure, the ambiguous boundary conditions in multiple layers, the reduction or enlargement of the notion of scale, the variety of light conditions which are resolved in today's industrial solutions through the frame structure or exterior materials in 1/f irregularity, reconfigured in 3-dimensional condition.