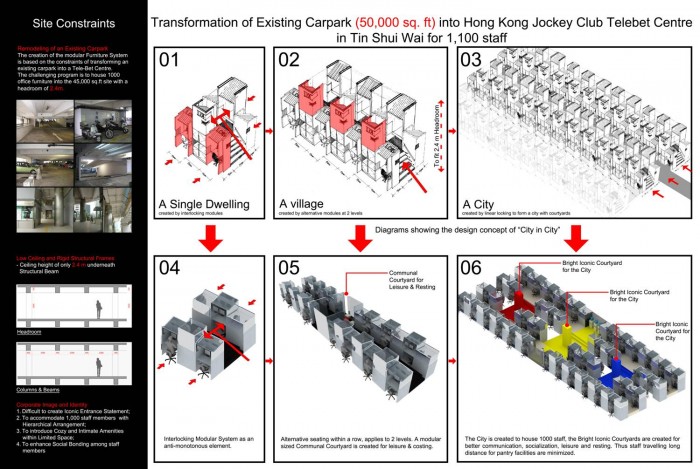 The project is the transformation of an existing disused and dilapidated carpark in a public housing estate into a telebet centre, creating over 1,000 job opportunities for the district with much communal needs.

Located in Hong Kong Housing Society building complex in Tin Shui Wai, the Hong Kong Jockey Club Tin Shui Wai Telebet Centre takes up 2 storeys of spaces that once were car park making up a total of some 45,000sq. ft. This big conversion of use meant a number of challenges to be overcome: the parking spaces has a low headroom of 2.4m, and to accommodate some 2,500 staff members (1,000 in Phase 1) considerable building services would be a fundamental must, on top of which community and staff caring design elements would have to be incorporated to meet the Client’s objectives.

Employing the allegory of urban design, the spatial arrangements within the Telebet Centre with hierarchical considerations is based on the design concept of “City in City”.

Entrance of the new Telebet Centre made use of a dead end space of the original car park, where now is fitted with high technology facial recognition system. The entrance hall is the central gathering point or the “agora” area of the “City”, where the other end leads to the Hall of Fame that was built upon the original car ramp.

Under this design concept of “City in City” where “humanity” is the prime concern, the working spaces are sub-divided into self-sustaining “mini cities”. Amenities facilities are interspersed among the groups of workstations, thereby breaking down the monotony of run-on seats. Opportunities for social bonding are also thus allowed under this community arrangement, offering a relaxing break from the work routine. Workstations are linked by circulations of “main streets” and “alleys”.

The concern for humanity is further manifested in the seating design, despite working under the stringent requirements of housing some 2,500 staff members within the given space. Rather than efficiently having two staff members sitting side by side and overhearing each other, 2 interlocking seating modules across 2 levels form a “single dwelling”, fitted with sound absorbent materials and curved glass tops. Each individual module is carefully designed under occupational safety requirements, with the right desk and chair heights, sufficient illumination and minimal sound deflection. The multiples of these modules, forming “villages” and thereby “a city”, not only increases spatial interest, they more importantly offer individual staff member more space, more privacy and more concentration during work hours.

Overhead, barisol roof diffuses illumination and minimise any glare. Irregular shaped apertures for air-conditioning vents also help visual stress relief. Together with the raised floor of the interlocking modular seating system, all the cabling and ducting for IT and building services are carefully concealed.

To complete the humane “city”, up market canteen and café are indispensable. A library and vending machines are also around for casual relaxation. One corner of the space was set aside as the green pocket space, with vertical plantings to serve as the “garden”. Ambient LED panel with blue sky animation comforts the eyes. The result is a satisfactory composition of elements not only tackling the many site constraints, but also shaping a staff caring working environment and creating an enjoyable vocational ambience.