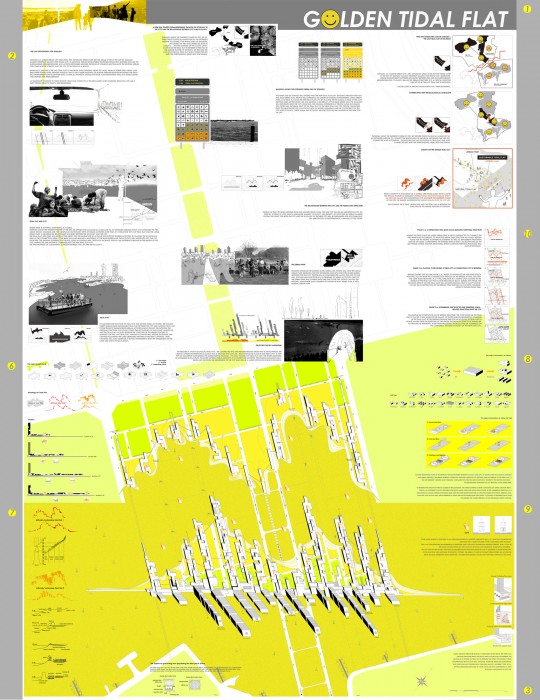 This Site is a place where environmental crisis and urban conflicts are overlain. About 2,300 birds were found dead around Songdo. This is just a mere indication of human oriented behavior pushing the natural environment and ecosystem into a critical situation. Should Incheon’s last remaining tidal flat be reclaimed and only to worsen this phenomenon?

Not only is this an environmental issue, the site is also of great importance in regards to the urban context. Songdo was developed as a linear urban city. Two separated urban axes including the single core at the top of Songdo cannot properly balance the whole city. Moreover, urban development happened separately between the IEFZ and the surrounding neighborhoods that arouse conflicts in between the areas.

From this, we had a very strong urge to start with a new beginning.
Focused on these two critical issues, we planned our site, not to become the edge of Songdo, but to be the new core which connects the IEFZ with the surrounding areas into a single whole. To provide this unique identity of a core, we considered the inherent power of the site, the tidal flat, and maximized it, rather than abandoning it. Thus, we defined the ecological landscape as an optimized medium to connect the whole area of Incheon, including the two disconnected axes in Songdo, by detaching it from the original site and relocating it in between the cities. Importantly, to maximize the function of the tidal flat and extend urban activities, a sustainable man-made tidal flat was inset between the city and natural tidal flat. By inserting this sustainable tidal flat, the ecological landscape organizes the program, social changes and the next step to a much more complex evolution of urban activities that may come with time.

Meanwhile, in the aspect of a long-term based idea for setting a coexistence between ecology and city, we suggest a sustainable mechanism to make and keep the Golden Tidal Flat. For both city growth and preservation of the tidal flat, an urban domino system, the key logic for both city and ecosystem, will be adopted into a sustainable city system. This does not require ‘created land’ through a reclamation process which definitely destroys the existing ecology. Instead of the city being defined by the architectural form, the new city will be an amorphous city, defined by systems of void which guarantee amenity, ecology and identity. By adopting an urban domino system, the logic for both the city and the ecology for this new city will be organized for accommodating unexpected, nondeterministic changes for the future.