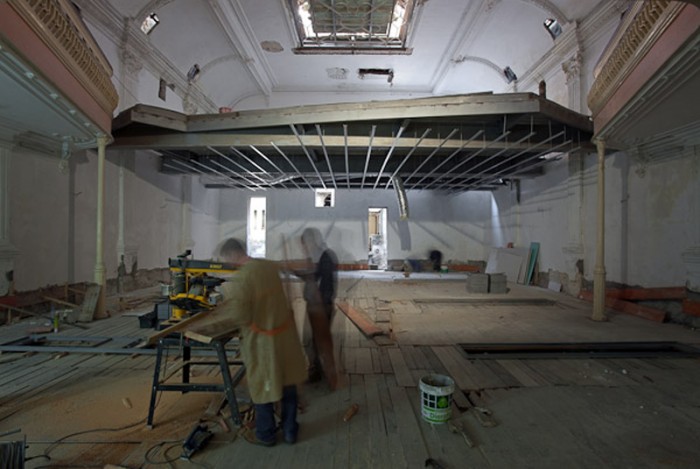 The building used to house the Young Man Christian Association in the city of Porto. The project consisted in its rehabilitation and conversion into a textile manufacturing unit. Divergent from the present urban expansion phenomenon, in this case, industry returns to the city center, Porto´s traditional function. Other signs of this return can be noted in the immediate surroundings - cafes, bars, shops, fashion designers.

The building's architectural value imposed the distribution criteria of the program. The ground floor naturally received production areas that involved heavier and larger equipment/machinery and an area for employees, taking advantage of the location of the former dressing rooms.
The main staircase and decorative elements on the first floor suggested the location of administrative areas.
The building's main room (former hall for religious services) occupying the first and second floor, presented favourable conditions for the production area. Designed to emphasize the time of intervention, the new pure volume (slab) that was introduced floats in the richly decorated scenery, at the same time as an open-space organization enhances the contrast between both.
The alteration of the building´s use was also reinforced wih the closure of the West façade bays. The new series of windows, with a clearly defined geometry, were differentiated from the existing openings that suggest the hall´s former religious function, far from the new use.

Nuno Valentim (Porto, Portugal, 1971).
Degree in Architecture, Faculty of Architecture of the University of Porto (1995).
Scholarships Fundação Calouste Gulbenkian, Erasmus (IUA Venice, Italy) and Inter-University Cooperation Programme (UT Delft, Holand).
Master in Rehabilitation of Architectural Heritage/Patrimony (FEUP - Porto, 2007)
Assistant Professor at FAUP since 2005, currently teaching the subject of Construction, 2nd year.
Sets up his own practice in 1994.
Finalist with Fredrico Eça of the Enor Prize 2007, FAD Prize 2009 and selected for Habitar Portugal 06-08, among other prizes/selections.
Works and projects displayed / published in Portugal, Brazil, Spain and Italy.

Frederico Eça (Porto, 1973).
Degree in Architecture, Faculty of Architecture of the University of Porto (2000), spent a year at the FAU-USP (Brazil), and collaborated with the architect Pedro Ramalho.
Since 1998 integrates Nuno Valentim´s practice working regularly as co – author.