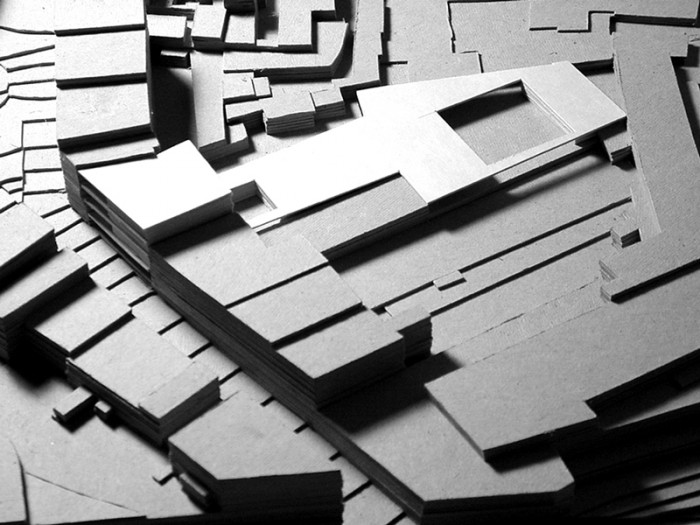 With an area of approximately 2000 squared meters (20m by 100m) and an irregular geometry, the plot had uncharacteristic dimensions and form for the city of Porto. The program was built along with the project – never before had a building in Portugal been specifically designed for the social integration of immigrants.
With these uncertainties we looked for clues in our immediate surroundings - we found warehouses, small factories, landfills and illegal constructions...
Our urban strategy led us to define a horizontal plane that would extend to the plot limits, where we cut out a sequence of courtyards/patios according to the need of natural lighting, the program itself and legal requirements. Facing the street, the office building is set on this plane.
Leaning against the inside face of the office building, the first void marks the entrance to the Center, sets the office building and the Center apart, and defines the relation between the Center and the street.
The second patio was created to illuminate the immigration support offices (medical, legal, employment, religious) and temporary accommodation (individual and family rooms).
The garden is the most significant cut-out in the covering, and serves the unifying area of the Center: a multi-purpose room (dining / living area / small auditorium), workshops, classrooms, a playground and an independent volume, the Chapel (ecumenical space).
Finally, the service courtyard at the opposite end in relation to the street, serves the laundry and toilet / washing areas.
Despite all the constraints, delays and uncertainties, our aim was to design a house with plenty of light and humanity, trusting that architecture can help bring hope to the immigrants it will host.

Nuno Valentim (Porto, Portugal, 1971).
Degree in Architecture, Faculty of Architecture of the University of Porto (1995).
Scholarships Fundação Calouste Gulbenkian, Erasmus (IUA Venice, Italy) and Inter-University Cooperation Programme (UT Delft, Holand).
Master in Rehabilitation of Architectural Heritage/Patrimony (FEUP - Porto, 2007)
Assistant Professor at FAUP since 2005, currently teaching the subject of Construction, 2nd year.
Sets up his own practice in 1994.
Finalist with Fredrico Eça of the Enor Prize 2007, FAD Prize 2009 and selected for Habitar Portugal 06-08, among other prizes/selections.
Works and projects displayed / published in Portugal, Brazil, Spain and Italy.

Frederico Eça (Porto, 1973).
Degree in Architecture, Faculty of Architecture of the University of Porto (2000), spent a year at the FAU-USP (Brazil), and collaborated with the architect Pedro Ramalho.
Since 1998 integrates Nuno Valentim´s practice working regularly as co – author.