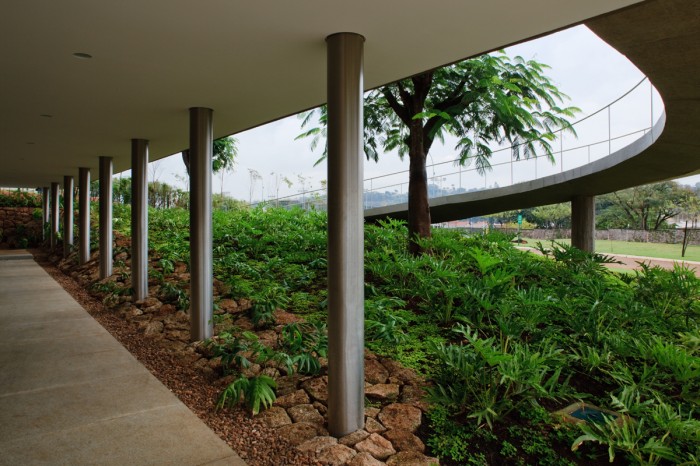 Piracicaba is a getaway house erected in the city of Piracicaba, 250 km away from São Paulo. It is intended to serve as a meeting point for a family whose members are scattered across various cities around the state.

The 2,000 sqm land resulted from merging two corner-lots in a gated condominium. Not only did the position of the house take into account the sloping contour of the land, but also its orientation (North), as to provide the bedrooms and entertaining areas with the best possible sunlight. The distribution on 3 floors arranged in perpendicular axes allows the land displacement to be overcome naturally, and makes the garden accessible from any floor:

- the lower ground, semi subterranean and positioned in the lowest level of the land, parallel to the contour lines, houses storage areas and garage - that standing on pilotis.

- the ground floor, laid out as an “L” and accessible from the street through an S-shaped ramp, houses the service areas and the lounge/dining room - the latter, fully encased in glass, on one side overlooks the back portion of the land and merges with the pool deck through wide sliding doors; on the other, is shielded from the sun and secluded from the street by a long brise-soleil made of vertical concrete panels, unevenly placed along the whole facade.

- the upper floor, a volume that stretches perpendicularly to the contour of the land and that, at one end cantilevers towards the street, and at the other is planted on the higher section of the land, houses the bedrooms and the den – the latter opening onto a large wooden deck, build on the ceiling slab over the lounge/dining room.

The swimming pool is snug in the nook of the “L” formed by the service and entertaining areas, and the slope rising to the higher sections of the land.

Amongst the various projects developed over more than 30 years ? several of them award-winning ? there are houses, commercial buildings, banks, advertising agencies, hotels, stores, restaurants, etc..., in Brazil and abroad.

Awarded several times by the IAB (Brazilian Institute of Architects), he was also granted a prize in the VI Bienal Internacional de Arquitetura de S?o Paulo, in 2005, for Amauri Square, and the Yellow Pencil Prize in the D&AD Awards for Livraria da Vila bookstore.