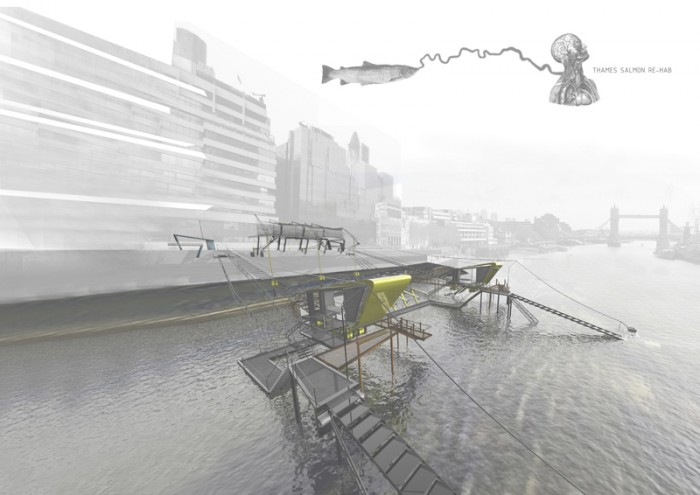 Sited at Fisherman’s Wharf, London Bridge, ‘Thames Salmon Rehab’ explores how the improved ecology of the River Thames can become a catalyst to the improved health of both humans and the now returning population of wild salmon. Before the industrial revolution, the Thames provided Londoners with salmon, which have only in the last 40 years started to return due to fact that the Thames is now the cleanest Metropolitan river in Europe. This has lead to a government funded re-population initiative, the aptly named ‘Thames Salmon Rehabilitation Scheme’.

The proposal
In the short term, the architecture dictates the daily routine of the inhabitants, making the fishery a place of dedication, a flooded/floating monastery. The health implications however, go far beyond the idea of purely a rehab centre or a monastery. Firstly, as the river gets cleaner, more species of fish and river life return to the Thames making the diet of the inhabitants vastly improved. The health of the fish population therefore is intrinsically linked to the health of the human population.

Secondly, as the accommodation floats on the Thames and moves up and down with the tide, the accommodation units are never more than 1m above the water line when in use. As the Thames is still saline at London Bridge, the users will gain all of the respiratory benefits through the gaseous exchange. Essentially, the project looks towards a future where if people become part of the Thames ecology and no longer masters of it, improvements in each will cause a chain reaction to the improvement of the ecology as a whole.

The structure is updated over three stages and approx 8 years and evolves from a single fishery to a developed fishing village where humans become sewn into the ecology of the Thames. This creates an architecture that increasingly heightens Londoners awareness of the importance of maintaining the Thames ecology and in turn maintaining the health of the human population.

The project focuses on five elements of routine which are controlled by the Thames tidal level rising and falling twice a day. These elements include scavenging the river bed, fishing, transporting fish, a live fish market and sleeping accommodation. Parts of these elements can’t be accessed at certain times of the day as they are flooded while others float and follow the water line. This routine, exclusively controlled by the Thames, becomes varied daily making the lives of the inhabitants controlled by nature and not by the enslavement of a 9 to 5.

The market, located on the edge of the existing wharf, is where the interaction between the inhabitants and the public occurs. Above the fish market stall, tanks are suspended which display the variety of fish. This ‘façade’ develops, becoming increasingly populated and diverse. A metaphor for the improvement of the Thames ecology. As the opening times of the market are dependent on the height of the tide and therefore change daily, Londoners can find out the opening times through looking at the predicted tidal times. Again, as the ecological variety improves, the health of the visiting public who purchase the fish improves.

In conclusion, the project is essentially about how the health of humans is intrinsically linked to the health of the ecology as a whole. For too long humans have not appreciated the fact that everything they do to the environment has repercussions that will directly affect them, potentially detrimentally. My ongoing thesis will look at creating an architecture that can link humans directly to ecologies.

This project was completed in my final year on the Post Graduate Diploma in Architecture course at the University of Westminster. The project was subsequently awarded the RIBA Silver medal. Having completed my studies I am now working in London for Rogers Stirk Harbour and Partners.