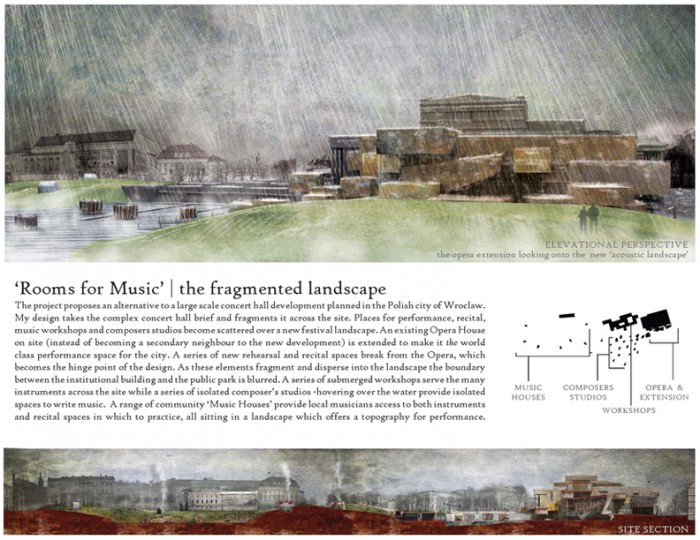 The work presented takes the title ‘Rooms for Music’ based in the Polish city of Wroclaw. The project reacts to current proposals to create a ‘Music Forum’ on the same site – including a new Concert Hall for the city. This polemical project proposes an alternative in which the cities existing Opera House is extended to provide the facilities needed for a word class performance venue; in doing so the institutional boundaries of the Opera break down into the landscape. The extension marks the beginning of an ‘acoustic landscape’ design, in which the Opera fragments into a series of new community music spaces (Music Houses), composers studios and instrument workshops.

The aim is to provide a design which is both modern yet references the history and materiality of the site, which celebrates its context and the monumental Polish architecture of its surroundings. A series of locally quarried Red Granite & Basalt clad volumes thus cantilever from a diaphragm core which houses circulation and service cores. These both reference the historic city wall on the site as well as create an internal landscape of performance plateaus and public spaces beneath. This fragmentary architecture, playfully intersecting the existing structure, is then allowed to break into smaller volumes which aim to provide the intimacy of traditional Polish, family oriented performance; these provide spaces in which the local community can perform or composers can write in this unique musical context. The landscape design itself is born from a series of noise surveys and subsequent acoustic modelling and manipulation of the site. The new topography aims to mitigate the problematic acoustics of the central city site – creating optimum outdoor environments for performance as well as linking to the cities historic waterway.

This intervention thus aims to make performance a part of the landscape, and thus part of the wider community – a permeable ‘anti-object’ in which music can be enjoyed, and explored. The traditional formality of the Operatic stage is juxtaposed with an undulating topography in which both visitors and users can meander through a range of spaces dedicate to music. In particular the smaller scale traditional music of the local Polish community as well as spaces dedicated to showcasing the best of Polish musical culture on an international scale. Music once again becomes a uniting symbol in a city still scarred by war and offers cultural cannon from which the city can rebrand itself.