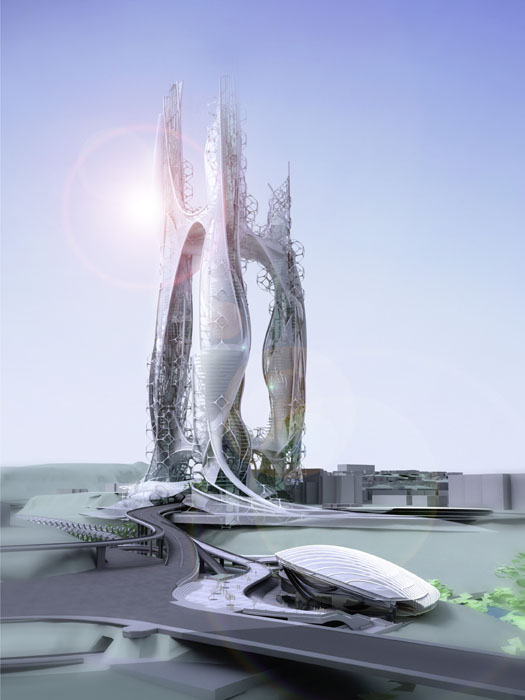 Multifunctional Complex in Yerevan.
The main idea of this project is architectonics and aesthetics of the new environment, which it creates. Also it has a purpose to be an alternative model for the architecture of the future.
This complex is designed to be in Armenia - Yerevan, (in the canyon of Hrazdan) which is situated not far from the historical center of the city. The whole complex is located in such a place, which can be considered as an entrance to the center of the city. By making some major changes with the environment where it is situated it also recreates the perception of an urban environment in Yerevan. This complex consists of three major parts |concept of skyscraper “Continual growth of an urban environment in vertical direction”|, |“Center for the Performing Arts”| and |“conceptual proposal of new roadway over the canyon and entertainment complex with landscaping inside it”|.
“Continual growth of an urban environment in vertical direction” here the idea of skyscraper is analyzed and designed in alternative way, with taking into consideration a human development, connection between human and nature, human scale. I have analyzed the concept of a skyscraper in several ways; the most important thing is to understand a skyscraper as a vertical growth of urban environment (especially urban environment of central business district). During the history of skyscraper development there were several important discoveries “lifts, discoveries in holding structure and aerodynamics, overcome of earthquakes”. This proposal suggests the idea of “continual growth” of skyscrapers, which can be the next stage of development.
Why continuing and vertically? In the nature everything is in the motion and during development it never stops to do its function. For example trees, they are doing photosynthesis since the sprout and continue doing this while they are growing. In our case, building complex can be used for some years, then with the need it can grow till skyscraper and even more. For continual growth structural unit should be designed for future development (for future loads that it will withstand). And every unit should be easy to connect to other ones (to all system). And during years it will be possible to add more and more cells (structural units). Here the unit is one of the platonic solids. The whole vertical urban system holds up by mega structures (designed with principles of space frames). And also every building inside the system, is steady itself. Mega structure also ensures stability during constructing new buildings (new functions).
This concept of skyscraper is designed to save natural resources. For ventilation here is used principles of termite mound. A system of channels and ducts circulates air through the mound in this case inside every tower there is one big channel (for air) which is open at the bottom, because main part of fresh air comes from the canyon, other part from the surface (which has many automatically controlled little openings). In canyon there is a river and more than several 100s of trees. White surface of skyscraper is a group of transparent solar plates and thin horizontal ceramic tubes placed on a steel framework, (these tubes will reflect 100% of solar light in to the vertical urban system) (inside building surfaces will be mostly from light transparent materials). Near the zone of dense vertical urbanization there are big openings from low-emissivity glass. These openings will allow to have more natural city environment with big panoramic view of the sky and city on the ground.
What kind of planning and detailed design could have this conceptual skyscraper? It is shown on the examples of hotel, business center and shopping center inside the first two towers.
“Center for the Performing Arts” Is situated on the other side of the canyon. This building has a three halls for audience with total amount of 2220 places. And also it has training stages, secondary areas and an underground parking. Important feature of this building is the possibility to connect three separate halls in one big hall for big performances. It is possible to do because of the uncommon geometry of an auditorium. “Three halls can be quickly separated using sliding walls”. Also the roof cover can be transformed in to transparent in order to have a natural lighting and a view of canyon and city. This building also connected with entertainment complex in the bottom of canyon, using vertical communication. And it is connected with the skyscrapers complex as well. So the pedestrian will has the opportunity to move inside this multifunctional complex.
“Conceptual proposal of new roadway over the canyon and entertainment complex with landscaping inside it” reconstruction of infrastructure of this part of the city, will improve traffic, and will decrease in number big traffic load of central avenue. Landscape improvements and an entertainment complex inside the canyon will create nice environment for walking and relaxing. One of the features is the big cover (overlap), which makes the walking area more comfortable, and a covered space inside it can become a big winter garden.
This project of multifunctional complex is a proposal of an ensemble of architectural forms, unity of which creates one big systemized architectural environment.

Since September of 2009 I'm Postgraduate architecture student in Yerevan State University of Architecture and Construction.
my web-site: www.vahan-architecture.com
my email: [email protected]