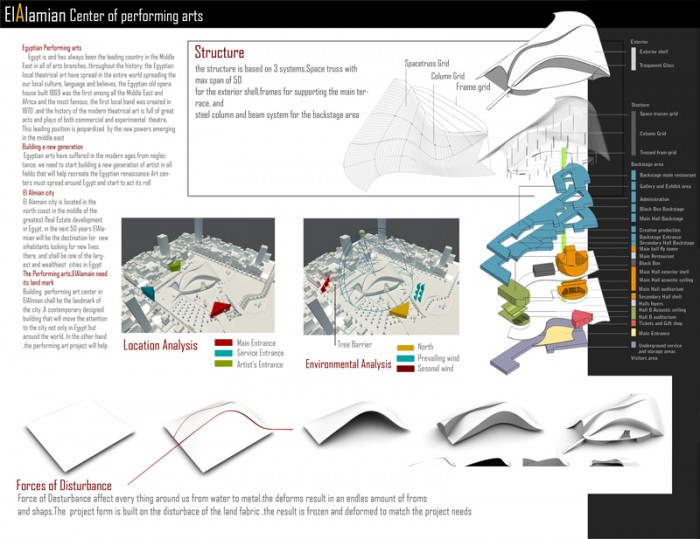 Egyptian Performing arts
Egypt is and has always been the leading country in the Middle East in all of arts branches, throughout the history; the Egyptian local theatrical art have spread in the entire world spreading the our local culture, language and believes, the Egyptian old opera house built 1869 was the first among all the Middle East and Africa and the most famous, the first local band was created in 1870 ,and the history of the modern theatrical art is full of great acts and plays of both commercial and experimental theatre, This leading position is jeopardized by the new powers emerging in the middle east

El Almian city
El Alamain city is located in the north coast in the middle of the greatest Real Estate development in Egypt, in the next 50 years ElAlamian will be the destination for new inhabitants looking for new lives there, and shall be one of the largest and wealthiest cities in Egypt

The Performing arts,ElAlamain need its land mark
Building performing art center in ElAlmian shall be the landmark of the city ,A contemporary designed building that will move the attention to the city not only in Egypt but around the world, In the other hand ,the performing art project will help in building the culture personality of its inhabitants along with the huge amount of visitors for this region

Forces of Disturbance
Force of Disturbance affect every thing around us from water to metal,the deforms result in an endless amount of forms
and shape,The project form is built on the disturbance of the land fabric ,the result is frozen and deformed to match the project needs

Khaled ElAshry
Alexandria,Egypt
Graduated in 2009 excellent with honor form the Faculty of Fine Arts Architecture Department where I currently working on My Master degree in Architecture Design.