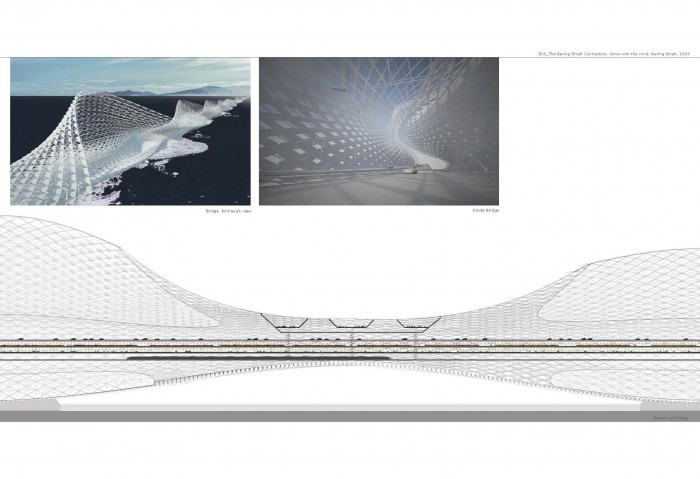 Gone with the wind

The wind, is not only to be avoided, but is also to be used carefully in the ocean. We propose the architectural device which protects the bridge and peace park from the strong wind, which will convert wind into energy by leading and utilizing the direction of the wind itself.
First of all, we suggest that the peace park will be located between two islands in the sea. The peace park which surpasses through time zones and borders between two countries, US and Russia, will be a unique place to blur the boundary of not only space, but also time in the world.
In this way, the two islands can sustain its natural self which retains its history of human beings. The space in between can also be symbolized as promoting and diminishing boundary.
Practically speaking, it is possible to be realistically constructed because the depth of the sea between two islands is just from 5 to 7 meters.

In addition, the peace park will be an example to display a solution of how human beings can survive in the extremely cold climate of the Bering Strait.
The energy generated from the wind supports the facility which makes it possible to cultivate agriculture such as fruits or vegetables inside a building without natural sunlight.
In Japan, the technology to grow food without sunlight has already been invented, and is currently being successfully used in some buildings by using only artificial lights.
This facility uses two artificial lights, High voltage Natrium Lamps (red light) and Metal halide Lamps(white light), which creates low expense costs to maintain, and radiates enough light for interior cultivation.

In 1979, in the US, when the press released a report that oil as a main energy source would run out within 4~5 months, people began to act violently and shot each other in order to obtain the oil.

In 1990, the increasing cost of oil brought about a general strike within the unions of the transportation industry in the UK.
This strike resulted in a lack of oil in gas stations which created a shortage in the supply of food in the supermarkets. Furthermore, people began to stock up heavily with food to the point where the UK government debated whether it would be necessary to involve the military in the situation.


These cases are undeniable evidence in depicting how important the issues of energy and food are as a fundamental basis in providing ordinary peaceful life to our world although it is not widely assumed to be so.

The nearly eighty-kilometer bridge between the two continents will bring practical advantages to two countries because its role is not only to connect each other, but also to make it possible to share the energy generated by the wind in the Bering Strait. These advantages can create a chance of being in agreement and accord with each other, for the relationship between the US and Russia has been antagonistic for quite some time.

through the web searching