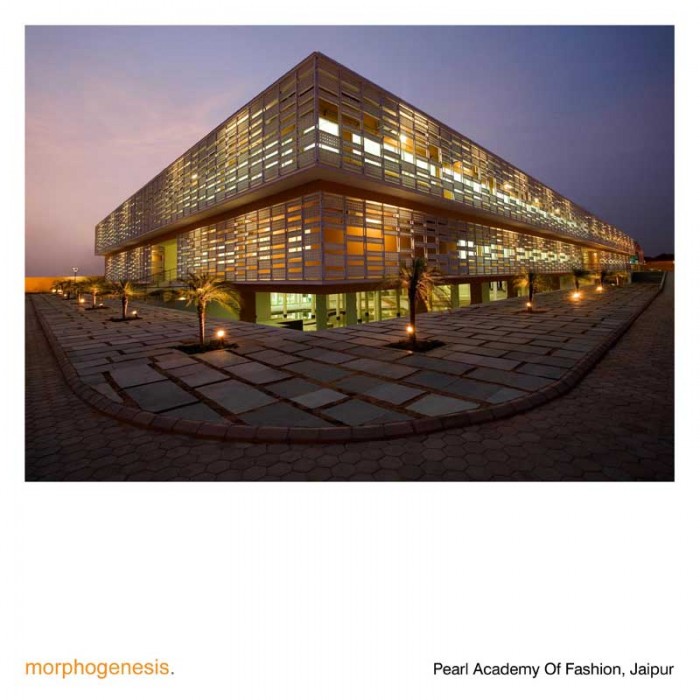 One of the crucial issues in contemporary India is that rapid development has inadvertently embraced generic modernism and eccentric novelty. The real task that challenges architects today, is to infuse new forms with the legacy of the past and the spirit of place. Jaipur is a melting pot of Rajput, Mughal and several other cultures and is also the seat of a generous amount of vernacular tradition. The challenge to build a progressive design institute requires addressing the new generation, contemporary social condition and needs to be inspired by tradition, in order to be inspirational to the contemporary sensibility of the modern-day design student.

The Pearl Academy of Fashion is located in a typical hot, dry, desert type climate on the outskirts of Jaipur in the soulless Kukas industrial area, about 20 kilometers from the famous walled city. The institute ranks third in the top 10 fashion design institutes in India, and its design needed to represent the seriousness of its academic orientation through its formal geometry. Architecture in Jaipur today, is a kitschy rendition of Rajasthani classicism and Mughal architecture remnants. The architecture of the academy needed to be a confluence of modern adaptations of traditional Indo-Islamic architectural elements and passive cooling strategies prevalent in the hot-dry desert climate of Rajasthan such as open courtyards, water body, a step-well or baoli and jaalis (perforated stone or latticed screen). All these elements have been derived from their historic usages, but will manifest themselves through the built form and become an intrinsic part of the daily life of the design student.

Within this historic context and the vocabulary of the region, the intent was to create a low-cost, environmentally sensitive campus that would set a precedent for other institutions. The architects’ restraint is the result of a strict design brief: that the building must be constructed within a tight budget of about 29$ per square foot inclusive of the building, landscape, interiors, furniture etc. The only way by which this seemingly impossible figure could be achieved was to virtually eliminate HVAC by deploying passive and low energy strategies amongst other cost saving strategies such as the use of local materials, techniques etc.

The design response was an introverted building, given the setting which was largely industrial. A long low-lying two-floored perimeter block pushes the building envelope to the mandatory setbacks, optimizing the exposed surface area to volume ratio of the form and almost seems to float above the land. As one moves into the building, this formality breaks out into fluid strips that are almost mobius in nature, bringing forth a sense of dynamism and drama within a static form. The site was excavated to a depth of four meters and two stories of classrooms, studios and offices on pilotis are raised above this void. Orthogonal perimeter offices frame a biomorphic configuration of classrooms and studios, drawing in natural light from all sides. Open and glass-walled walkways surround these undulating blocks, which define openings to the lower level. The second storey juts out above the first and both are clad in fretted panels attached to a metal frame. The traditional courtyards take on amorphous shapes within the regulated form of the cloister-like periphery. This curvilinear geometry is generated through a computerized shadow analysis that tracks the precise movement of the sun through the day and across the seasons. The self-shading sliver courtyards help to control the temperature of internal spaces and open step-wells, while allowing sufficient day lighting inside studios and classrooms. What results is a muted play of forms, the perimeter block acting as a background to the gentle glide of shadows and curves, accentuated by the rhythm of verticals: pillars, railing, ends, corners, and joints.

The resultant scooped-out shaded underbelly forms a natural thermal sink by way of a water body. This step well is reminiscent of the traditional baolis that are scattered all through the hot and dry region. All throughout history, the water body has served to be the attractor for public spaces. Thermally banked on all sides, the underbelly is a grotto-like space, a space for sacred congregation within an academic institution: for students, for activity and chance activity, for recreation, exhibition, and interaction amidst the organic setting of green and water. Throughout the day, students spill out from classes, the library, and cafeteria onto the walkways and down to the underbelly. The water body is fed by the recycled water from the sewage treatment plant and helps in the creation of a microclimate through evaporative cooling.

The Jaali or the fretted screen is traditionally been exploited in Indo-Islamic architecture as an alternate between a wind/air filter, as a light filter to cut out light/glare and as a privacy filter. For the fashion institute in such an extreme industrial environ, all the filters were deemed necessary. Thus, a reference is made to the playful expression of the variations of the jaali whose density is derived using computational analysis based on orientation of the facades. This double skin that sits 4 feet away from the building thus acts as a thermal buffer between the building and the surroundings and reduces the direct heat gain through fenestrations. The space between jaali and the wall acts as a thermal barrier and a ventilated service corridor through which the horizontal pipes, cables and ducts are supplied through the building.

Passive environmental design helps achieve temperatures of about 29 degree Celsius inside the building even when the outside temperatures are at about 47 degree Celsius. During the night, when the desert temperature drops, the floor slowly dissipates the heat to the surroundings, keeping the area thermally comfortable. A gentle breeze flows continually in all directions, generated by the temperature differential between inside and outside and the cross ventilating Venturi effect. Earthen pots (mutkas) about 35 cm in diameter are laid on flat roof, 2.5 cm apart, and the spaces between are filled with sand and broken bricks and covered with a thin layer of concrete. This is a traditional Indian technique to reduce the heat absorption on the floor slabs through the insulation provided by the fill and the air within the pots.

The materials used for construction are a mix of local stone, steel, glass and concrete chosen keeping in mind the climatic needs of the region while retaining the progressive design intent. The exterior is painted orange to set off the white jaali, but the interior surfaces are white, to reduce heat absorption and create a cool backdrop for the bustle of activity. Energy efficiency is a prime concern and the institute is 100% self sufficient in terms of captive power and water supply and promotes rain water harvesting and waste water re-cycling through the use of a sewage treatment plant. Besides having become a very successful model for cost effective passive architecture in desert regions the design and facilities of the campus complement the ideology of the Pearl Academy of Fashion – a cutting edge design institute with a sustainable approach. The Pearl Academy of Fashion is an exemplar of an inclusive architecture which intends to accommodate all the heritage values while positioning it within the contemporary cultural and architectural paradigm.

Morphogenesis is a design practice engaging in a critical dialogue towards bridging the boundaries of art, architecture, urbanism and environmental design in India. Founded in 1996, Morphogenesis is an association of architects, designers, urbanists and environmentalists. The Morphogenesis approach to creativity is inspired by the evolutionary processes in nature to create built form which is optimized for the built environment and the community. Design is viewed as a result of different stimuli, ranging from climatic conditions, urban fabric, local traditions, and human activity. At Morphogenesis, sustainability is a core creative value and is practiced in the evolution of the design. The practice considers the widening scope of sustainability to be all inclusive; to include social, cultural, financial, technological and environmental sustainability. It is this inclusive nature of design that, Morphogenesis believes, will define the new emergent Indian architecture.

Issues within the architectural realm of Morphology and Sustainability are investigated and tested within the research laboratory to re-define the conceptual and the contemporary framework of design practice. The think-tank delves deeply into socio-economics, culture and identity, exploring new models and approaches to architecture and design, whilst operating in the factual domain simultaneously.

The firm is based out of New Delhi and is in the process of setting up an architecture and design school in India. The work of the practice has been exhibited at several venues internationally including the Gallerie ROM in Norway and the Royal Institute of British Architects in London in an exhibition titled ‘Critical Projects’. The practice has been the recipient of numerous awards and accolades including the Green Good Design™ Award- The European Centre for Architecture Art Design and Urban Studies and The Chicago Athenaeum 2009, The Architectural Review Cityscape Awards for the Best Environmental Design internationally and the Residential (Built) category, Project of the Year in The AIQ Awards (Israel), The A+D Spectrum Award for ‘The Young Enthused Architect’, Indian Institute of Interior Designers- MK Award and the JIIA (Indian Institute of Architects) Award for excellence in architecture among others. The work has also been extensively published in both national as well as international publications including Architectural Design, Domus (Italy), Architecture Record, Spaces (UK), The Atlas of Global Architecture (Spain), Art 4D (Thailand), Contemporary Indian Architecture, The Guardian (UK) and 10+1 (Japan).