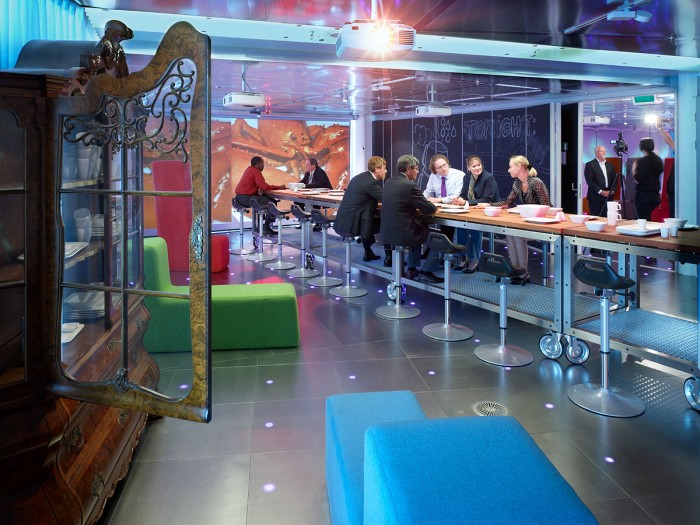 BRIEF
LEF* future center is situated in the head office of the Dutch Ministry of Public Works and Waterways (Rijkswaterstaat). This new center must provide an inspiring environment where employees of the Ministry gather to find innovative and creative solutions for the complex infrastructural questions and challenges in transport and water management in the Netherlands.

SOLUTION
We developed the overall concept of LEF future center in close cooperation with the client Rijkswaterstaat. The interior design, the AV applications and the LEF house style (from the clothing of the employees to the crockery) is designed by our studio.

Flexibility is key in the design of LEF. An endless variation in atmospheres and settings can be formed with lighting and sound, visualisations, projections, moveable floors and portable furniture, to evoke different moods or states of mind. All rooms can be adapted to meet the specific wishes of the user-group and the nature of the session.

The extensive use of audiovisual tools is an essential feature of LEF. Every room is equipped with wide projection screens and beamers to show tailor-made projections. A team of filmmakers has developed an unique imagebank. This visual library is the basis for the 360 degrees projections in the multimedia theatre. Here the visitor is challenged to adopt a different mindset.
In one wing of LEF, some 1500 LED's are incorporated in the steel floor. These LED’s can light up in several combinations of colours and patterns. By this, specific areas can be marked, directions are indicated and atmospheres are created to support the work sessions.

The 12 metres high conservatory presents several installations, connected by the central theme ‘Change’. These interactive installations, with images and sound, are meant for inspiration and reflection for the users of LEF.

Kossmann.dejong, exhibition architects, is an Amster¬dam-based multimedia design studio specializing in exhibition and interior design. The agency was founded in 1998 by Herman Kossmann (1958) and Mark de Jong (1960), both graduated in architecture at the Technical University in Delft. Kossmann.dejong has grown into an agency with over 20 employees. Alongside temporary and permanent museum interiors, the studio also designs interiors for visitors’ centers, clubs, hotels and large-scale events. The subjects of their exhibitions range from architecture, history of psychiatry and children’s books, art for teenagers and micro-organisms.

Kossmann.dejong is currently working on the new Maritime Museum in Helsingør (Denmark), the Historisches Museum Frankfurt (Germany), MicroZoo for Artis (the Netherlands) and the Maritime and Beachcombers Museum Texel (the Netherlands). The most recent projects the permanent exhibi¬tion ‘Laurens Church, a monument full of stories’ in the Laurenschurch in Rotterdam and a multimedia story about the UNESCO World Heritage Canal area in Amsterdam for Het Grachtenhuis.

In 2010 Kossmann.dejong, in cooperation with Frame Publishers, has published ‘Engaging Spaces, a valuable and timeless sourcebook for everyone interested in the field of exhibition design.