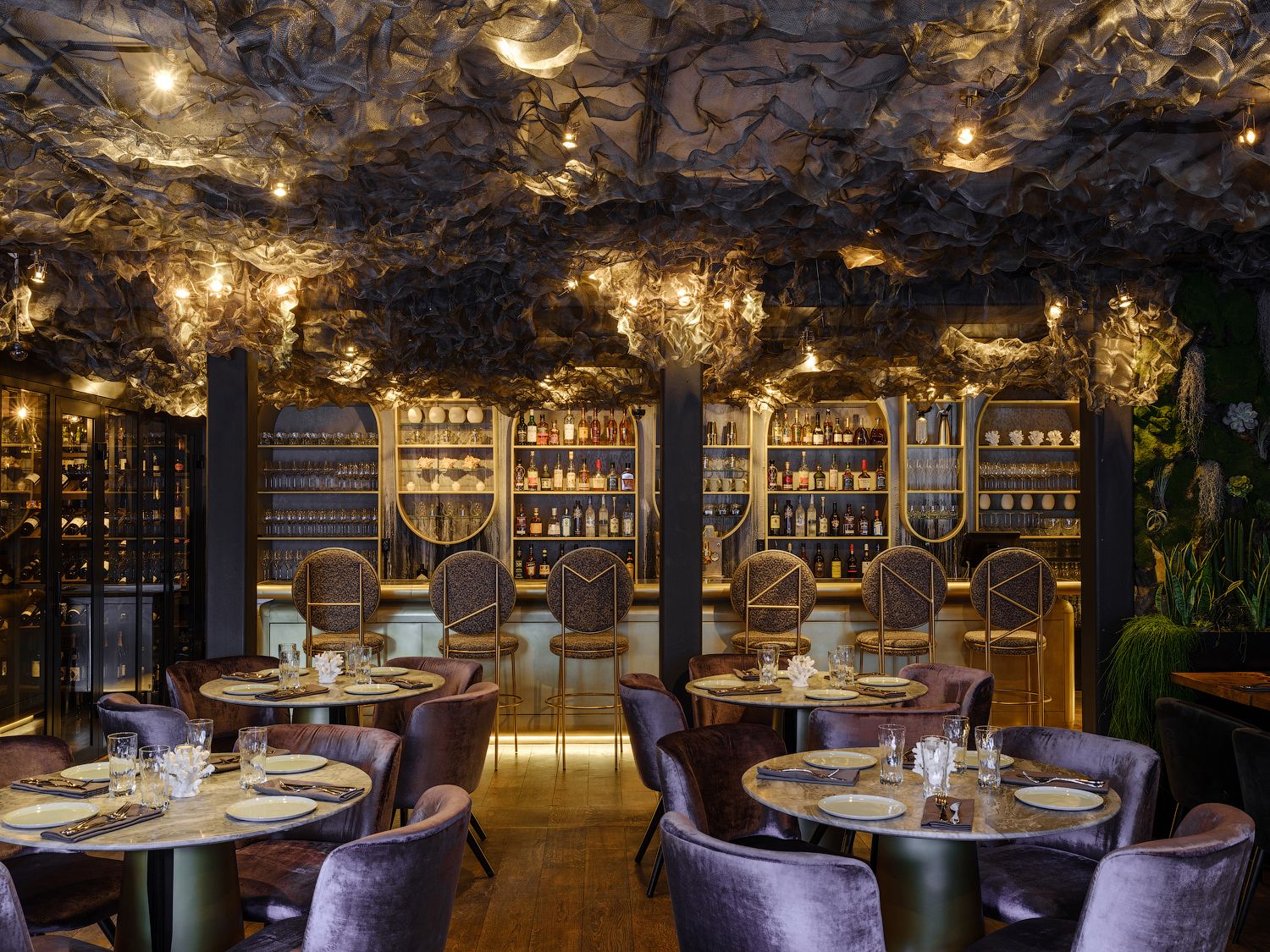 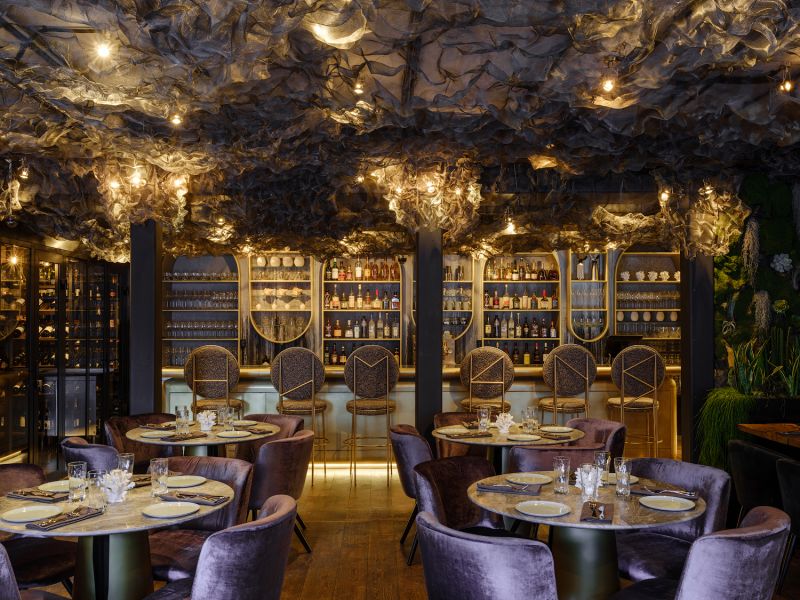 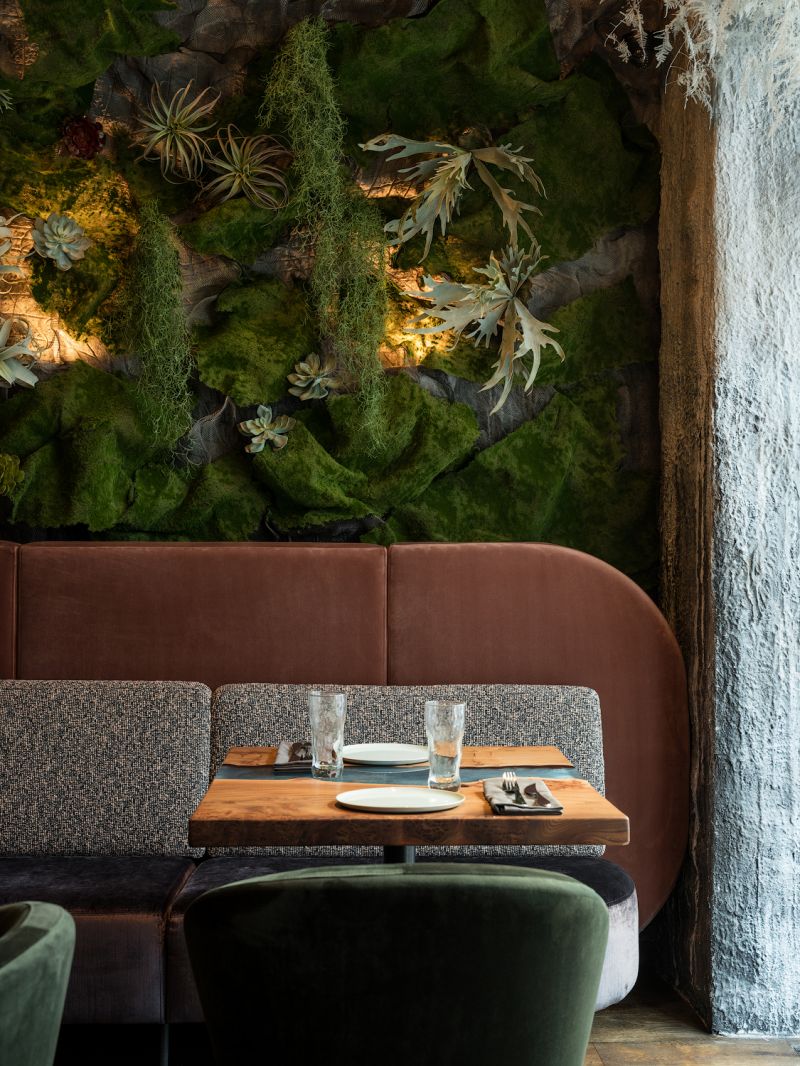 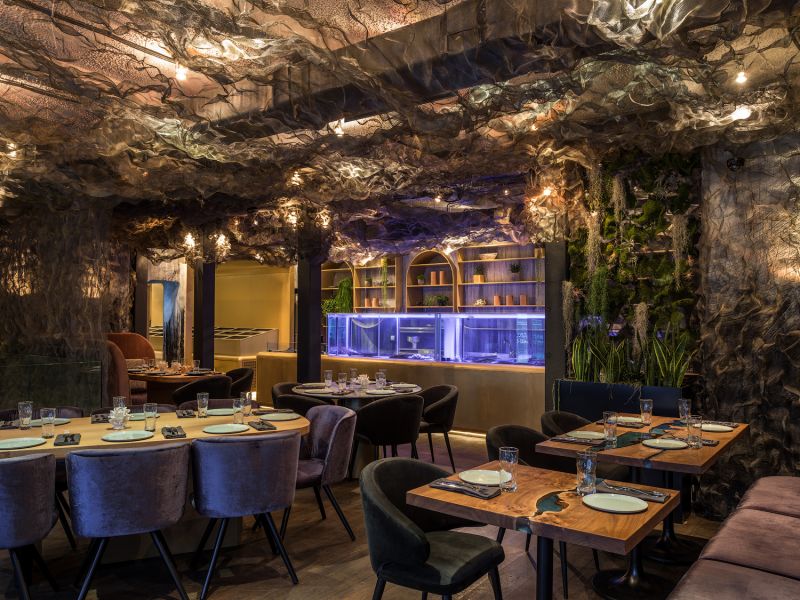 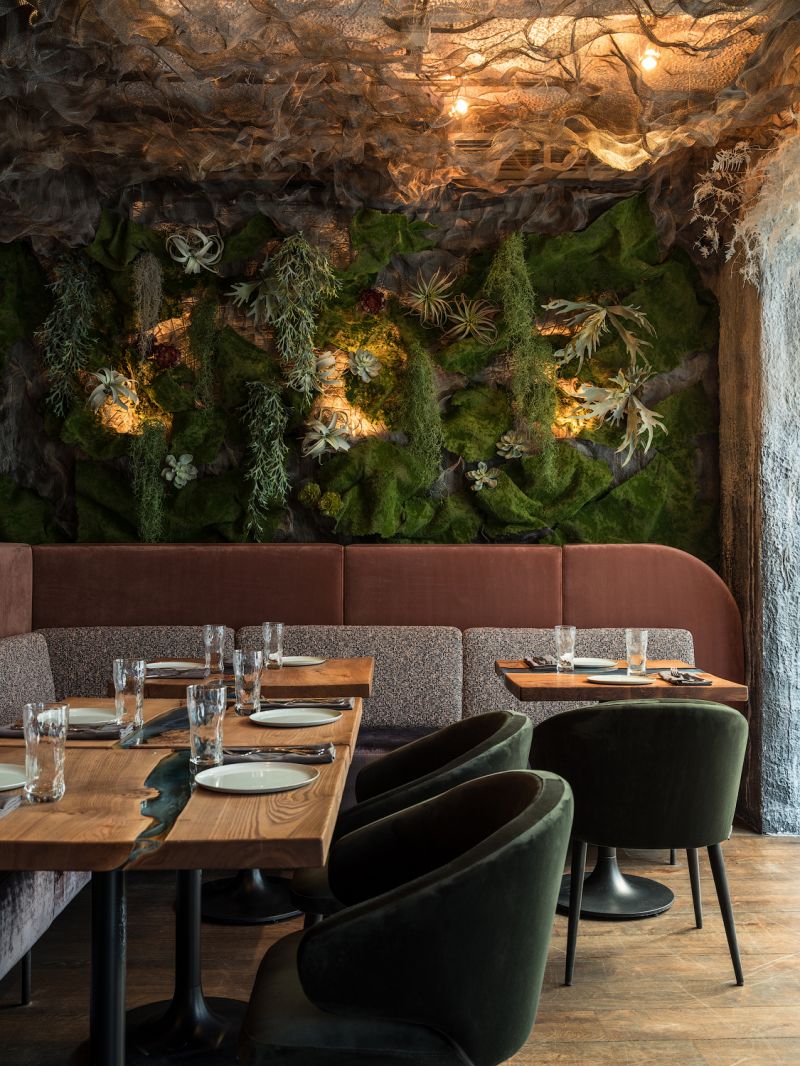 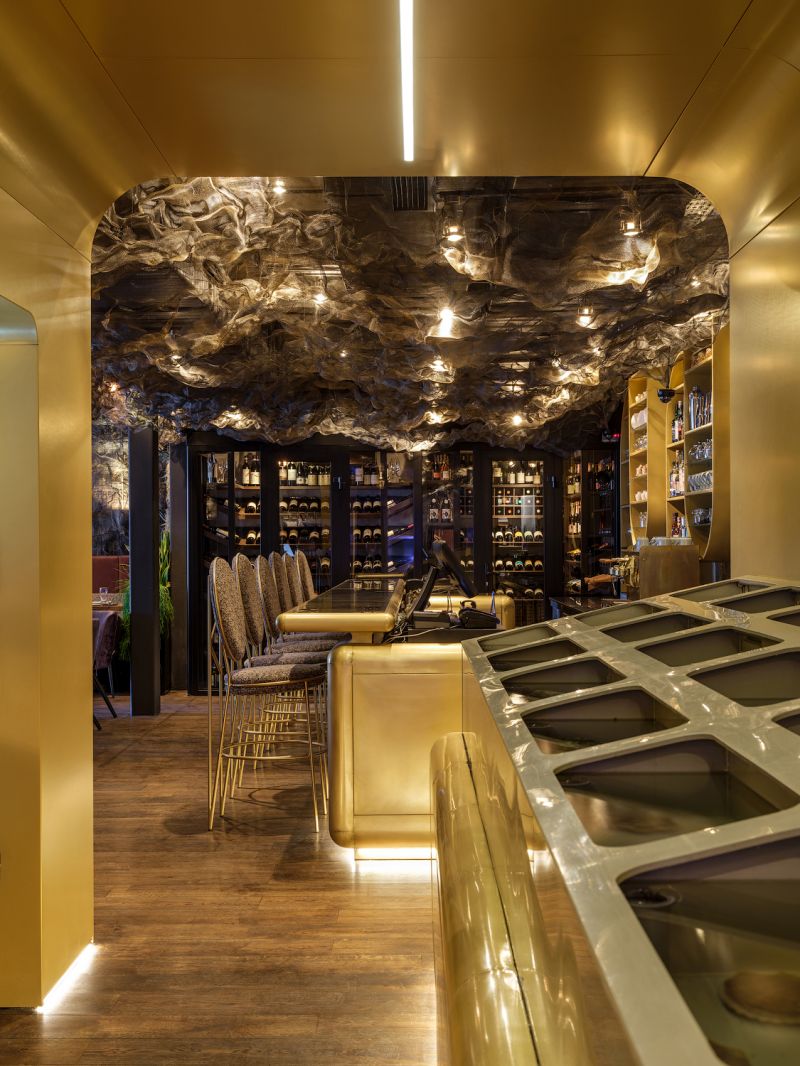 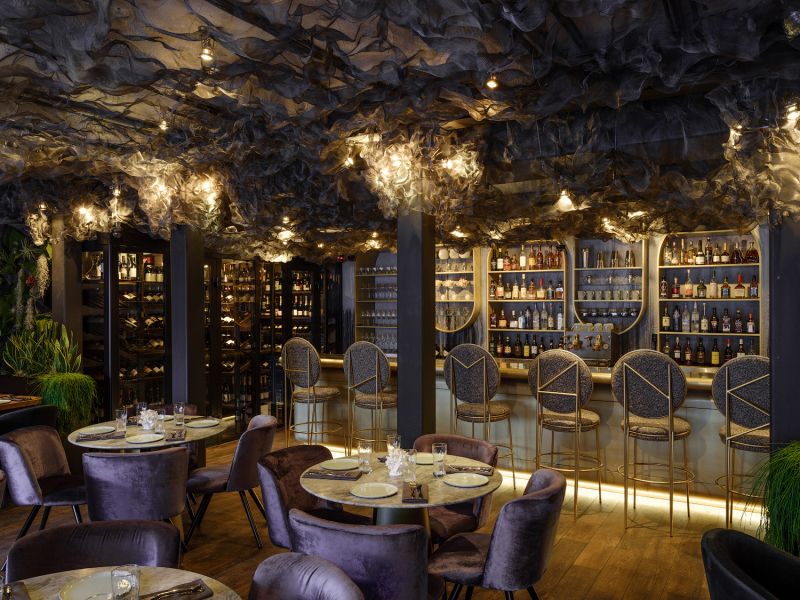 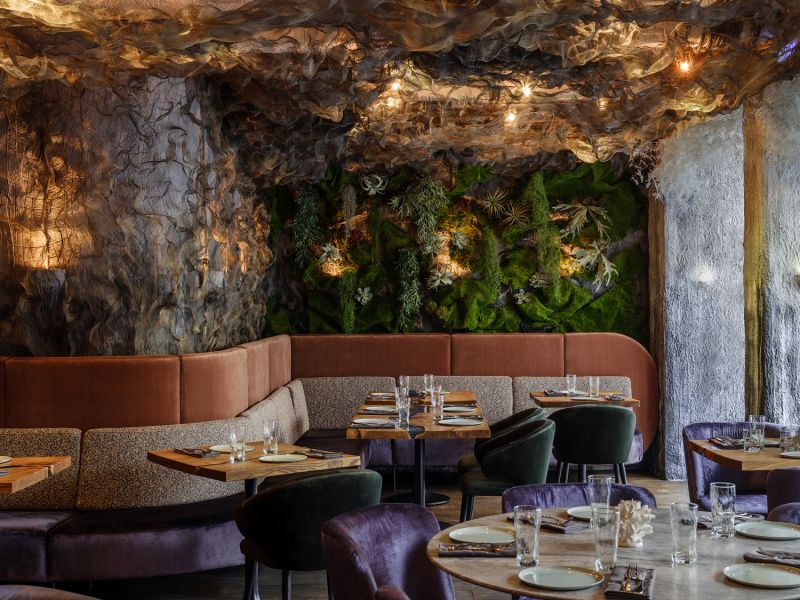 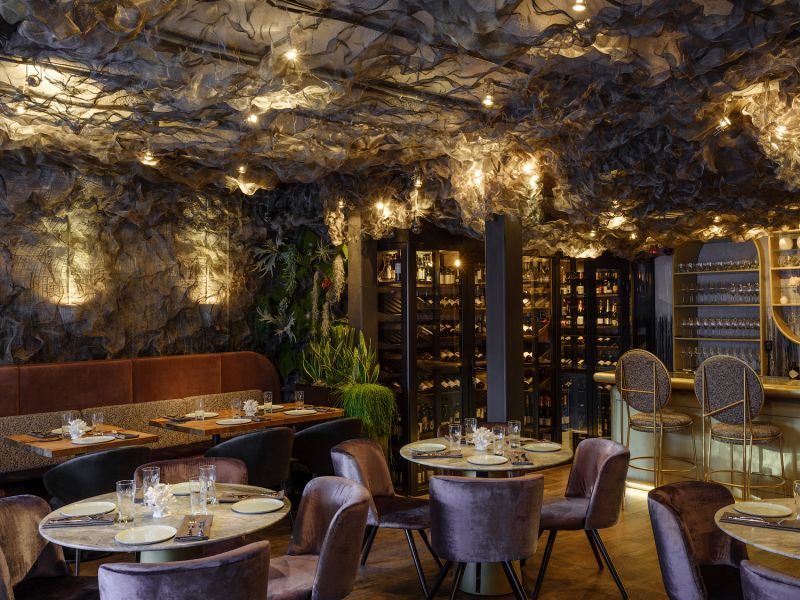 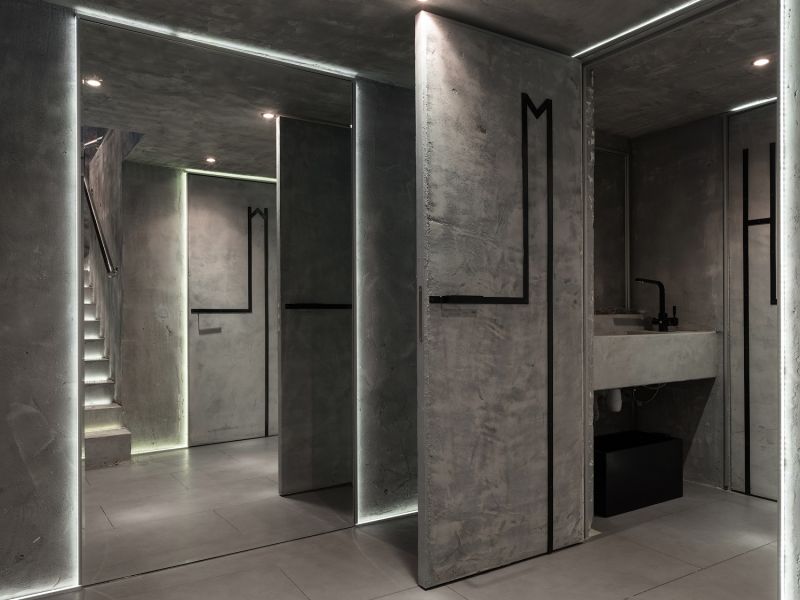 The Humans Seafood Bar - а brooding, alternative oceanic realm on the ground floor of an 18th-century building in the fashionable Patriarch Ponds of Moscow came to life at the hands of Yuna Megre, MEGRE INTERIORS.
The space welcomes guests with multi-layered waves of textured grey mesh; a conspicuous and wholly original tribute to the sea, defined by undulating surges that drift along both the ceilings and walls.
The rough textures and underwater atmosphere do not deprive the restaurant of elegance: exclusive silk velvet, oak and marble furniture bring comfort and nobility to the interior.

Founded in 2008 by Yuna Megre, MEGRE INTERIORS is a Moscow and Los Angeles based creative house specializing in hospitality design.
MEGRE INTERIORS is a team of over two dozen dedicated specialists – designers, architects, CGI artists, buyers, managers – who employ a team-based agile approach to creating breathtaking concepts while delivering quality design in tight time frames.
Using the proprietary WERGONOMICS concept-driven methodology, Yuna Megre takes a human-centered approach to design, believing that everything that we create in this world creates who we are in return.

In 2012, London's Time Out awarded Best New Design to the MariVanna restaurant - the first international award to be scooped by a Russia-based studio.

In 2013, MariVanna London project was shortlisted by the Restaurant & Bar Awards in London.

In 2013, Sixty | Sushibaba project was published in the Interior Design Review Volume 17, an annual round-up of the very best of global interior design projects.

In 2014, MEGRE INTERIORS’ project was published in China, in the CONTEMPORARY EUROPEAN STYLE HOME book listing the best examples of the European style and design.

In 2016, Patara and MasterCard Business Lounge SVO both won the INTERIA Awards.

In 2016, Twins restaurant named in the Best 100 Restaurants In The World ratings.

In 2017, MariVanna London restaurant was hailed among the Best 100 British Restaurants by Open Table.

In 2017, Ruski restaurant was published in the Interior Design Review Volume 22.

In 2017, The Hello! magazine ranked Yuna Megre as the most stylish designer in Russia.

In 2018, Ruski restaurant was awarded the Palme d’Or for Best Design, and three of the studio's other projects were nominated for international prizes such as the HD Awards.

In 2018, Spoon Guide's Top 100 Moscow Restaurant ratings featured Rybtorg, Patara, Twins, and Elardji, while Rybtorg made the 25 Best Restaurants in Russia in the GQ listings.

In 2020, Sartoria Lamberti, Atelier de Tartelettes and GATHER experience, were shortlisted for the International Hotel and Property Awards 2020.