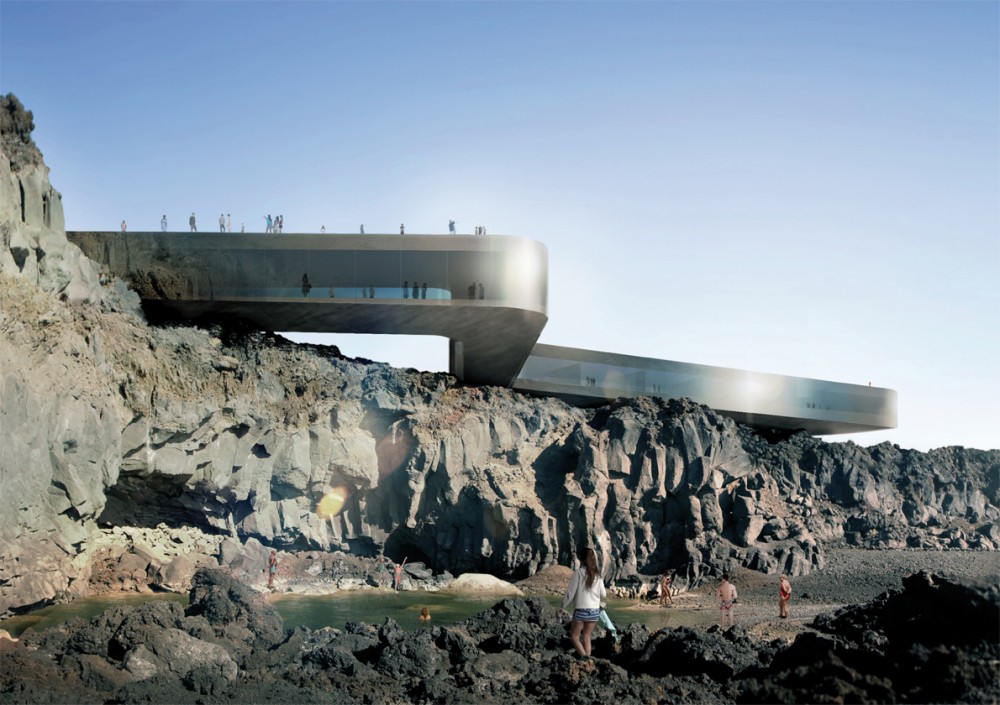 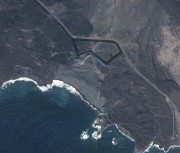 In a landscape characterized by powerful natural elements and particular fragility, the new spa and public pool is configured in form of a bridge, which minimizes the interference between the building and the protected area of the lava flows.

The building creates a synthesis between architecture, infrastructure and landscape.
Levitating atop the landforms of the surroundings, it constitutes a landmark that identifies the location of the hot spring. It is a horizontal lighthouse and lookout point, whose materiality makes it at the same time stand out and dissolve into the surrounding landscape.

The spa is designed as an ‘unfolded’ pool, as a new, suspended shore line. It is a playful and therapeutic space that recovers the experience of the original hot spring - which emanated on the shore and was used by the collective - and the contemplation of the horizon, taking advantage of the therapeutic nature of the landscape itself.

GPY Arquitectos (Tenerife, Canary Islands) is formed by Juan Antonio González Pérez, Urbano Yanes Tuña and Constanze Sixt. In the insular context, we understand architecture as a spatial search for new forms of relating the human being with his surroundings, dissolving the limits between interior and exterior, public and private, urban and territorial.
We have a special interest in public buildings, thought of as a sequence of social spaces related to the city and the landscape. Our challenge is to propose imaginative solutions to the real problems of our society.

The studio has received a number of high-profile awards in recognition of its work. In 2003 GPY won the International ar Awards of Emerging Architecture and the Silver Medal at the Miami + Beach Biennial. That same year the studio was nominated for the European Union's Contemporary Architecture Prize Mies van der Rohe and in 2008 for the Iakov Chernikhov International Prize. In 2009 GPY won the Experiencia/Futuros: Mi obra favorita (Experience/Futures: My Favorite Work) Award of the Higher Council of Architects in Spain (CSCAE) for its work on the Tenerife Centre of Dramatic Arts, a project that was also featured at the exhibit 'On-Site: New Architecture in Spain' at the MoMA in New York and at the 'Spanish Architecture 1975-2010. 35+ Building Democracy' group show in Athens, Nicosia and Madrid.
GPY Arquitectos’ projects have been published in numerous publications such as the Phaidon Atlas of 21st Century World Architecture, 1000xEuropean Architecture, 10x10_2.100 Architects 10 Critics.