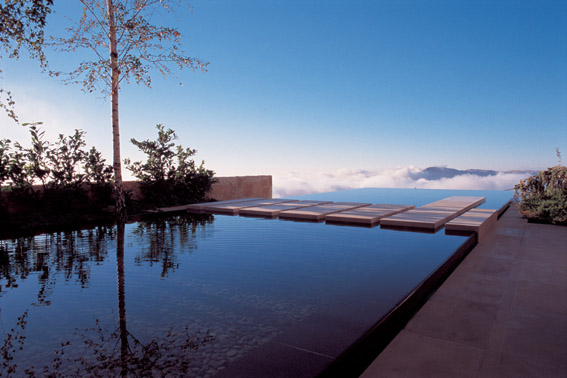 The challenge of this project was to provide spaces to cater for various functions in an extremely narrow site. The garden was conceived almost in its entirety on the construction setback of 4.5m around the house. This limited site is designed and controlled with a series of illusions and careful manipulations to yield the maximum sense of space and experience. The program consists of multiple sitting areas, a water mirror with a cantilevered jacuzzi underneath which an outdoor bar area is sheltered, a swimming pool, a large entertainment terrace with a long linear bench, and a fire place and BBQ area.

At the upper level, the entrance approach is defined by a simple welcoming expression of a solid stone staircase, embedded in linear lavender-filled planters, aligned with the entire length of the house. Facing the glass dining room area, a recessed sitting area shaded by a canopy, a raised water mirror, and cantilevered negative-edge Jacuzzi align to capture the breathtaking view. Floating stepping stones lead guests down to the warm bar area, consisting of solid stone and red cedar wood.

From this lower level, the negative-edge swimming pool again frames the magnificent panorama from both the indoor lounge area and from the outdoor entertainment terrace and sitting area. The long linear bench acts as a safety balustrade and rest area for large gatherings, which becomes the back support of this built-in sitting area with fireplace. A discreet BBQ zone is concealed in a wooden shelf between maple leaves. Finally, a narrow staircase embedded in the ground leads guests back up to the main entrance.

Vladimir Djurovic was born in Beirut to a Yugoslavian father and Lebanese mother in 1967. After receiving his Undergraduate Degree in Horticulture from Reading University in England in 1989, his Masters Degree in Landscape Architecture from the University of Georgia in the U.S. in 1992, and after having worked with EDAW in Atlanta, he headed back to Lebanon to establish his landscape architectural practice in 1995. Vladimir Djurovic Landscape Architecture is engaged in the creation of timeless landscapes through its commitment to drawing out the uniqueness of an environment with simplicity of gesture that gives nature the stage. His firm has gained recognition at the national, regional, and International levels for their approach and innovative design work through renowned magazines, books, and television features. In addition to lecturing in such noted venues as the Architectural Association of Ireland and Imperial College in London, the office has participated and won several International competitions such as Freedom Park South Africa in 2003 and The Ismaili Centre and Aga Khan Museum landscape architectural competition in Toronto in 2006. The office has also won numerous awards such as the Cityscape Architectural Review Awards 2005, and most recently the American Society of Landscape Architects (ASLA) 2007 Award of Excellence.