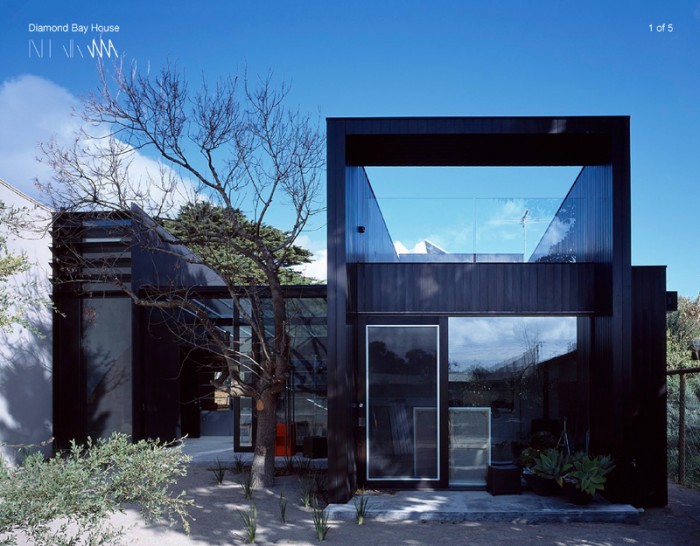 Our brief was to create a new house for two highly regarded artists that included studio space for working at home. The result is a house of two parts ? black timber studio, and sinuous masonry house ? conjoined by a thread of kitchen and greenhouse. In discussion with the client after a first conceptual idea, it was decided that the National Gallery of Victoria?s arch, a Melbourne icon, would be translated into this house.

Unlike our previous coastal houses, this house focuses inward, responding to the need to carefully control the ingress of natural light; the almost urban approach was a reflection of the urban living patterns of the client.

However, this house of strands allows the landscape, both present and future, to enter. The strands were planned around existing tee-tree, retaining the native vegetation and slowly supplementing the environment with careful replanting of a native garden.

The roof of the sinuous living wing is carefully detailed and presents a fifth elevation to the street. The angle of the tilt from two storeys to a single storey allows the eye to perceive the diagram of the living wing: an enclosure between two inflected, cambered walls. This idiosyncratic inflexion of the floor plan crimps the space, tapering views to a slice, creating a spatial and visual separation between public and private zones. The cambered walls produce extended vistas and travel lines, exaggerating the volume of the interior, and heightening the experience of moving between zones. The circulation sequence is weighted towards a longitudinal axis, glazed at each end, and results in a perception of space that extends beyond the house and into the garden.

The cooling south-westerly breezes also align with the longitudinal axis, and operable windows, louvres and ventilation flaps at each end of each space ensure balanced summer temperatures. The longitudinal walls have few windows ? light enters from the north or south, always reflecting off one or more surfaces before illuminating the space. This protects the artworks and creates an even lighting effect.

The continuous, mezzanined space is interrupted with devices and objects rather than compartmentalizing with walls. These interruptions make for a more adaptable sense of space and a softer cushion to the life of the occupants. With large sliding doors and moving parts the occupants can make demarcations and sharper definitions of space, in effect making their own rooms.

The client supported the creation of a tailored architectural solution, rather than merely stocking the spaces with off-the-shelf items, allowing a richness of detail within their house.

A living room under the lowest point of the ceiling is set down one step, emphasising the sense of enclosure and privacy. A pond at the foot of this space?s south-facing window pre-cools the prevailing breezes for added summer comfort.

There is a pronounced separation between internal and external expression. The internal experience begins in the kitchen/greenhouse element; crafted black zinc external cladding leads to black paint, orange Marmoleum and stainless steel inside. This space has a fine grain of highly resolved and elaborated details. This low-ceilinged element articulates the threshold between black timber studio and white-walled living/gallery space.

The arch ? a defining moment in the expression of the architecture ? is only fully perceived after you have moved inside the stone-floored living/gallery space. The arch is a portal, literally and metaphorically. A monumental entranceway, paradoxically private and internal, this portal is representative of artistic ambitions. The principal drama of this house is reserved for the occupants.

The greenhouse traps winter sun in the travertine-paved concrete slab floor. Large sliding doors and vents expel warm air in summer, and draw pre-cooled air from the pond at the shady southern side of the house, where the prevailing breezes come from in summer. Natural convection is aided by the raking ceiling over the living spaces, allowing hot air to escape, or be moved downwards by ceiling fans, depending on the climate. There is a synergy between the movement of light/air/occupants and the sinuous form of this house.

Ten 150Watt photovoltaic cells provide approximately 50% of the client?s yearly electrical energy needs. Solar hot water is provided by an Edwards system. A 20,000 litre water tank is fed from the roof and supplies water to garden taps, the greenhouse, the laundry, the dishwasher, toilets pans and showers. Tap fittings are AAA rated, a high level of water efficiency. Materials were considered for their low embodied energy and low V.O.C emissions. ESD consultants Sinclair Knights Merz where engaged to advise on this project.