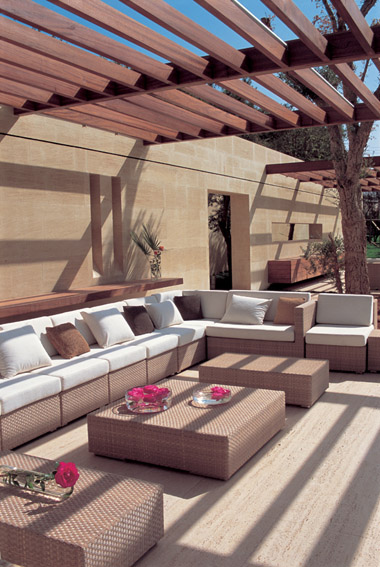 The challenge of this project was to create an outdoor environment capable of hosting numerous events and functions up to 300 people in the harsh desert climate of excessively hot days and cold nights. In addition, the entire project had to be designed and built in 6 months and ready for the summer season.

Emanating from two limestone walls, a totally self-contained, tailor-made facility was conceived to meet this challenge in the most efficient way possible. All functions required, such as industrial kitchen, open bar, bathrooms, showers, and changing rooms, are embedded within the walls, between series of linear gardens. A 6m wide x 40m long cantilevered pergola provides shade and shelter with uninterrupted vistas of the pool and gardens.

To further counteract this harsh environment, shade screens and a climate control system are discretely incorporated within the structure. Screens slide through linear grooves, hot and cold air are delivered through others. Music and lighting further enhance the soothing character of this escape.

In axis with the existing main residence the swimming pool was conceived. A travertine stone basin brimming with water becomes the magical backdrop of gatherings and events. In this pure elliptical form, massive travertine slabs were laid side by side, then hand-carved by local stone masons to produce this seamless and elegant form that gently slopes to produce an aqua lounge, then warps to become an underwater suspended sitting area and jacuzzi.

Specimen tree groupings are incorporated to enhance and frame the project, along with a date tree orchard in the background to provide more than fifteen varieties of edible dates. Underneath that orchard, a vast rose garden provides scent and cut flowers to animate the gatherings and events.

Vladimir Djurovic was born in Beirut to a Yugoslavian father and Lebanese mother in 1967. After receiving his Undergraduate Degree in Horticulture from Reading University in England in 1989, his Masters Degree in Landscape Architecture from the University of Georgia in the U.S. in 1992, and after having worked with EDAW in Atlanta, he headed back to Lebanon to establish his landscape architectural practice in 1995. Vladimir Djurovic Landscape Architecture is engaged in the creation of timeless landscapes through its commitment to drawing out the uniqueness of an environment with simplicity of gesture that gives nature the stage. His firm has gained recognition at the national, regional, and International levels for their approach and innovative design work through renowned magazines, books, and television features. In addition to lecturing in such noted venues as the Architectural Association of Ireland and Imperial College in London, the office has participated and won several International competitions such as Freedom Park South Africa in 2003 and The Ismaili Centre and Aga Khan Museum landscape architectural competition in Toronto in 2006. The office has also won numerous awards such as the Cityscape Architectural Review Awards 2005, and most recently the American Society of Landscape Architects (ASLA) 2007 Award of Excellence.