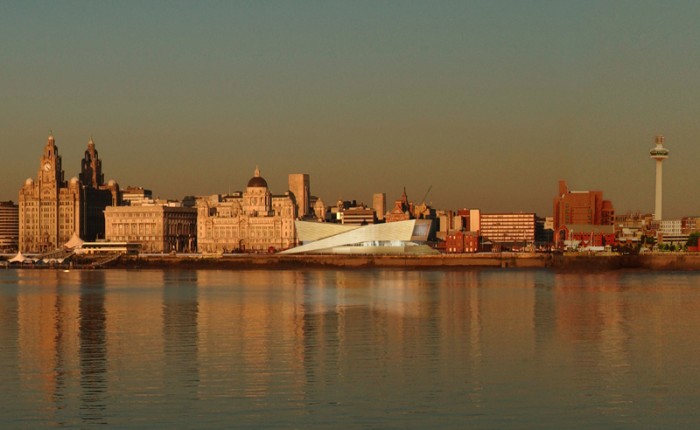 The 3XN winning proposal for a new British national museum; the Museum of Liverpool, envisions a dynamic, open and democratic structure that grows out of the chosen site.

Museum of Liverpool is to be built at the city?s most prominent site; the listed dock area by the River Mersey, next to ?The Three Graces?. The Liverpool Docks were inscribed at UNESCO?s World Heritage List last year. The building is conceived as inclined or elevated platforms, gradually forming a sculptural iconic structure. All surfaces will be accessible; giving way to the public promenade flow along the Docks. Situated at the Pier Head, the museum will be visible from both the river and the city.

The Museum of Liverpool will become the World?s leading city historic museum, and the first national museum to display popular culture and tackle social history in all its complexity.

Hope is that the new museum will attract at least 750.000 visitors on a yearly basis, and that Liverpool, with the Museum as a lighthouse, can be resurrected to new grand times, and that the visionary building will attract creative forces, generate new agendas and along the way create a new and attractive image for the city.

HOW WE THINK AND WORK
Since the establishment in 1986, 3XN has reached the present status in the contemporary world of architecture especially by insisting on architectural competitions as the main generator for creative development. Since 1999, the engagement has reached outside of Denmark to the Nordic countries, The Netherlands, Germany, the UK, France and China. Activities in other countries suggest a further future growth, also beyond Europe.

3XN has won a wide range of important architectural competitions, such as the Museum of Liverpool and the University of Salford Faculty of AMSS, UK; the Music Building, Amsterdam and the City Hall of Niuewegein, NL; the Royal Danish Embassy, Berlin, DE; the Deloitte, Sampension, FIH and Architects? Buildings, all four in Copenhagen, DK.

3XN?s starting point is the end-user. Spatial, tactile and environmental qualities are all based on the human perception of the people living, working or passing the buildings. One of the office?s forces is our proven ability to maintain the competition proposals? poetry and architectural vision in the completed project - within budget and time limits. In this respect, 3XN display vast experience, ranging from sketch planning and digital documentation to construction management and supervision.

3XN have specialised in major challenging tasks such as cultural buildings, large residential schemes, public institutions, masterplanning and corporate residences. This means that the firm is continuously engaged in various architectural competitions all over Europe.

A central element of our ongoing development is the quest for a perfected synthesis between out-of-the-box visionary architecture and logical, effortless and genuine function. The utmost focus is on architectural control on all levels, from overall contextual coherence to the simplest detail that we encounter with our eyes and bodies every day.

Simplicity must never turn plain or conform. We demand perceptive experiences: a sense of vibrating poetic movement that is beyond words as well as matter. We have an ever-present respect for place, history and function. Every building task is unique, and is treated as such. We emphasise architectural articulation via proportioning, the processing of materials and the planning of detail in close co-operation with the individual client.
HOW OTHERS THINK WE WORK
Nationally as well as internationally 3XN have been acknowledged by receiving awards and invitations to exhibitions and publications of our projects.

2007, 3XN?s Music Buildng in Amsterdam was declared the best building in Netherlands in 2006 - it was awarded the DUcth Building Award; Nederlnadse Bouwprijs. To design anotehr country?s best building is perhaps the finest award one can get. 3XN is also nominated for a 2007 MIPIM AR Future Project Award for the project for Renault Truckland in France.

2006, 3XN got a Silver Medal at the Miami Bienal, USA, for the Museum of Liverpool. The Music Building in Amsterdam was awarded both the ULI Award Europe, the LEAF Award and the Dedalo-Minosse Special Prize. At MIPIM in Cannes, 3XN won the MIPIM/Architectural Review Future Projects Award in two categories; Residences in Nordhavnen, Copenhagen, came first in ?Residential?, and the Middelfart Savings Bank won ?Offices?. 2005, the same award was granted 3XN for the Copenhagen ?City for all ages? project.

2005, the DGI Centre for Urban Sports received the IOC/IAKS Award for outstanding sport- and leisure facilities, awarded by the International Olympic Committee, first time ever to a Danish project.

June 2005, 3XN received an RIBA Award 2005 for the Sampension Headquarters in Copenhagen, built 2003. Again, for the first time ever a Danish project was awarded.

2004 3XN was represented at the Biennale in Venice with no less than 3 projects - Slussen in Stockholm; The Danish Radio Concert Hall and The Savings Bank ?Kronjylland?.

On a personal level, Principal Architect Kim Herforth Nielsen has been honoured with the Eckersberg Medaille by the Danish Academy of Architects in 1999 , and in April 2000 he was knighted by Her Majesty the Queen of Denmark as Knight of Dannebrog, with the right to carry Ridderkorset (Knight?s Cross).

3XN?s projects and other information can also be reviewed at www.3xn.com