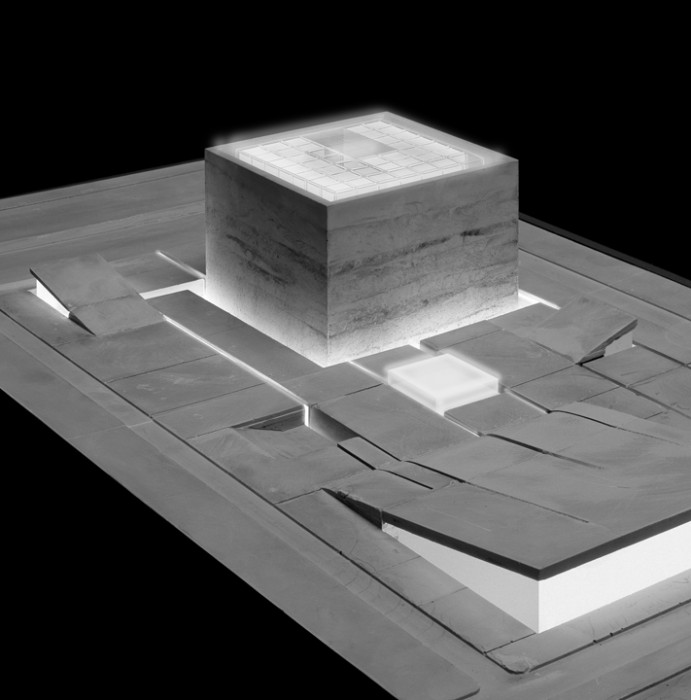 ARB Bank Headquarters is conceived as a series of earth-forms within an active farmland that will change with seasons. Cultivating the land amidst the desert landscape creates a strong sense of place and identity for ARB Bank, which was established by farmers.

The centerpiece of the project is a cistern, where the water is collected, controlled and distributed. A 60-meter tall rammed earth box rises from the cistern. The walls of the box act as a protective envelope against harsh climatic elements like sun, wind, dust, and urban conditions like noise and blast. Within these walls a labyrinth of interconnected program elements are located.

The program of the bank is divided into three neighborhoods: 55,000 m? of office space, 15,000 m? for amenities, and 20,000 m? for parking. These elements are interlocked to maximize the interaction. The whole complex is woven together with a spiraling ramp that runs along the rammed earth wall.

The monolithic wall is penetrated by ?periscoping-windows,? an armature to control light & views that allows one to see without being seen. The windows create a phenomenal play of light & shadow, and allow intermittent glimpses of views, as one moves along the spiraling ramp.

Rammed Earth construction, the technique of pounding moist earth into a formwork to create monolithic walls of earth, has been used for thousands of years. This traditional construction technique allows the use of inexpensive local materials in a thick walled system that maintains a high thermal mass leading to lower energy use.

By utilizing time-honored elements, the overall effect is sophisticated yet sympathetic to the environment and context.