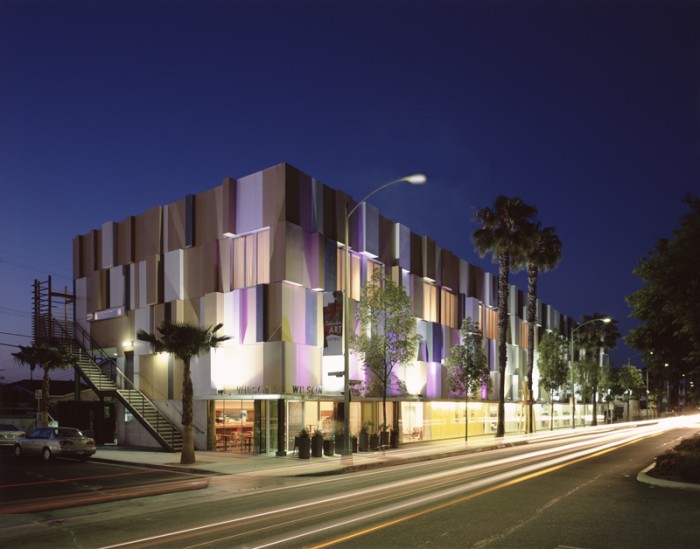 Set exactly on the transition line between Culver City?s easternmost development, the Helms district, and its less developed Eastern corridor, the MODAA building captures the energy and transition of the city along Washington Boulevard, acting as a visual gateway to the city?s burgeoning Art District to the East.

MODAA?s ground floor houses the architect?s studio, a high-end restaurant, and a 2,200 square foot dedicated art gallery that explores the relationship between design art and architecture. In addition to serving as the architect?s conference room during the day, the MODAA gallery has become a true community asset during its first year of operation, hosting two community town hall meetings for the City, an Urban Land Institute case study program, an art and lecture series about sustainable design, an AIA student design competition, and a host of additional events open to the public.

The second floor of the building contains the residential component of the mix; seven live/work lofts that feature 16-foot ceilings with mezzanines and 6-foot high glass sliding doors mounted on the southern wall as oversized windows.

While the architect developer could have entitled over twenty residential units on the land, they chose restraint, still making a financially viable project, but ensuring that they were able to create a beautiful space where people could both live and congregate around the arts. The MODAA building now anchors the City?s annual Art Walk celebration, and serves as the Westernmost gallery on a 30-gallery tour down the City?s main artery.

On the exterior, the building design captures the flavor of the city?s 1920?s art deco origin without conforming to the historic style. Its fa?ade, designated by the City?s Cultural Affairs Commission, ?Architecture as Art,? explores the variation, movement, velocity and tempo of the city on all scales, using material and texture in variations that stimulate and delight the imagination. A slowly changing series of LED colors emanate from the fa?ade?s southwest corner at night, mesmerizing passersby from the outside and creating an playful invitation to would-be restaurant clientele.

Functionally, the award-winning fa?ade serves as a rain screen, insulation to the building surface from the sun, and as an acoustic diffuser for the city?s main artery.