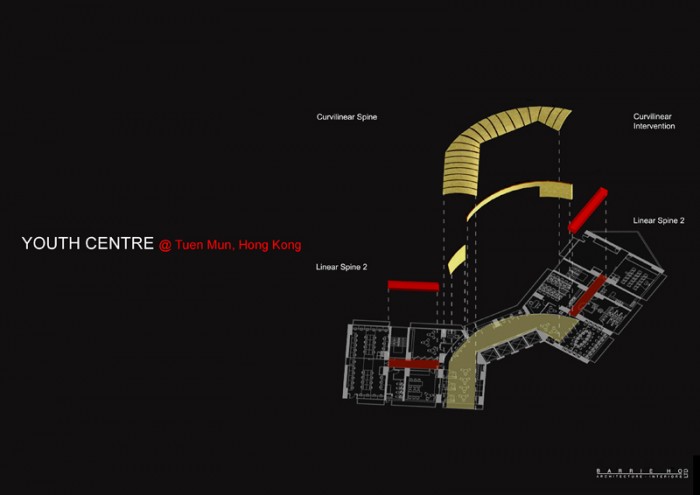 <Circular Spine>
In order to get rid of the undesirable Y-Shaped spaces imposed by the existing site condition, a ?Circular Spine? is superimposed onto the main circulation corridor which integrates the reception, audio-visual spines, I.T. network booths, internet caf? as well as the career and studies corner.
The circular spine successfully deconstructed the odd shaped entrance and spatial quality by introducing the curved up ceiling.

<Infinite Perspective>
Apart from the functional facilities equipped along the circular spine, the curvilinear quality of the spine creates? Infinity? in visual perspective as the metaphor for youth development as well as injecting the ?Young? and ? Energetic? ambience.

<Convertible Space>
As the Youth Centre is designed to cater for a number of functions at different seasons; for example, Career Development or Education, Counseling and Tutorials, Seasonal Activities and Gatherings, Study Room and Play Room etc

Many of these functional requirements are well equipped with convertible configurations and transformable in different seasons to fit a particular purpose.

- Internet Caf?
The Internet caf? located at the Circular Spine is an individual pocket for individual to work on Internet for privacy without major disturbance.

- Study Pocket
The study Pockets installed inside the muti-functional room is inspired by the self-sustain Hawker?s stalls. Each pocket is conceived as a home base for individual for computer, self-study and writing, the pocket module is able to be totally closed down when it?s not in use.

- Child-play pocket
A specific pocket space is permanently designed for children as a hang out spot where relevant fabric cushions are installed from wall to floor with rich colors for children?s relaxation and activities.