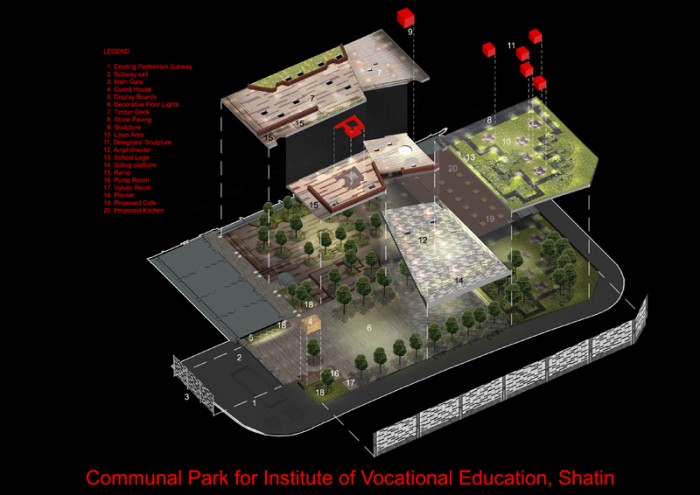 The Communal Park for the Institute of Vocational Education, Shatin, was paved in fluid folds that exhibit a vibrant floor pattern. Just like origami, the landscape exhibits gentle slopes and folds: in one way the folds go up and spring outdoor furniture, in some other circumstances the folds are presented in the form of different floor patterns.

<Metaphor of Cityscape in the Park>
The Communal Park is set against a stunning cityscape. The topography and the vibrancy of the pleasant surroundings is introduced into the Park through the fluid folds and dissolved onto the random floor pattern. The transparent fence walls also break down the boundary between the society and the Institute at the visual level.

The random fence wall pattern was also conceived as a metaphor of the hustle bustle of Hong Kong city life.

Hence, the design of the Communal Park on the whole presents a metaphor of city life outside.

<Multiple Folding Forms>
As a Communal Park, there are benches, amphitheatre, caf?, guard house, to name a few such objects, all engendered from the folding of the landscape. The folds extend all the way to the lawn with some designer chairs in between.

<Comfortable ambience>
The new Communal Park now offers a comfortable place where educators and students would like to stay for lunch, to exchange ideas during and beyond school hours, to hold extra curricular activities, etc. They now have a nice photo spot for their graduation photos as well.

<Different Day and Night Settings>
Different settings and ambiences are introduced into the Park for daytime and nighttime to cater for both groups of users from day school and night school.