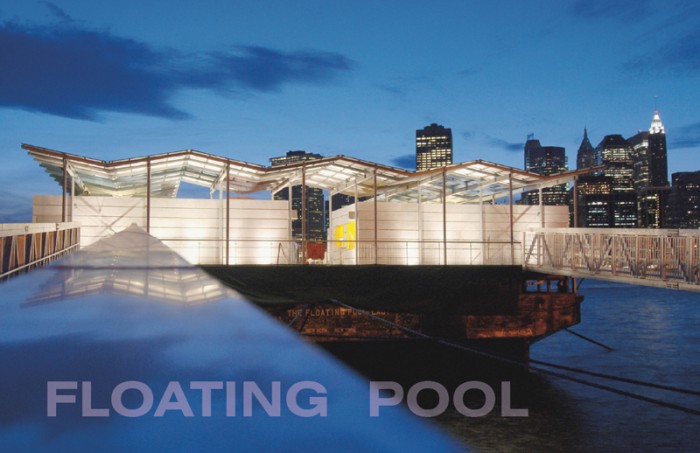 Inspired by early 20th century floating bathhouses, The Neptune Foundation commissioned the design and adaptive re-use of a former cargo barge into a floating pool complex. The 260? long steel barge was purchased in Louisiana where major design and engineering pieces were installed in 2003-05. It was then tugged to New York for outfitting and finish work. The completed Floating Pool, moored along the Brooklyn Heights waterfront, hosted over 50,000 swimmers during its inaugural summer in 2007.
A 'mobile recreation pier' now within the NYC Department of Parks and Recreation public pool system, the Floating Pool in summer 2008 served up to 1200 swimmers daily at its new Bronx location: Barretta Point Park along the Hunt?s Point waterfront. The Hunt?s Point community is one of the most disadvantaged neighborhoods within the five boroughs, both economically and environmentally, and has a significantly higher asthma rate among its youth population.
In terms of plan organization, the pool?s changing rooms, showers, offices and a snack bar collect around a raised court, with children?s spray fountain and dining terrace overlooking the pool deck. Visitors access the court via the arrival porch on the shore-side of the barge, where 90? aluminum gangways connect the pool complex to land.
From the defined space of the court one moves to the changing rooms and showers at either side, past 40-long translucent aquatic-themed murals, finally ramping down along the edge of the barge to the pool deck. The 50-meter seven lane pool is set within an expansive checker-boarded surface inviting public interaction. Shading pavilions flank a raised seating area and frame the view of the harbor. The facility is fully lit for evening events.

Jonathan Kirschenfeld Associates is internationally recognized for design excellence over a wide range of public and private architectural commissions.

Mr. Kirschenfeld began his studies in 1976 at the Institute for Architecture and Urban Studies headed by Peter Eisenman. The following year, he was invited to work in the Milan office of Aldo Rossi and had the opportunity 15 years later to collaborate with Rossi on the Holtzman Residence in Michigan. Soon after graduating from the Masters program at Princeton, Mr. Kirschenfeld was a founding partner at Architrope, an award-winning design firm established with Andrew Bartle in 1987.

The firm's most recent large-scale project, The Floating Pool (www.floatingpool.org) drew major television, radio and print coverage during its inaugural summer season at Brooklyn Bridge Park. The 20,000 square foot facility, an example of the firm's commitment to sustainable design, hosted over 50,000 visitors during its eight week season, and won an international 2007 Award of Excellence from the Waterfront Center. The Pool was also honored as the runner-up in the prestigious 2007 Cooper-Hewitt Museum People's Choice Design Award, and recently won a 2008 Masterwork Award, a 2008 Building Brooklyn Award, and a 2008 Neighborhood Achievement Award. Additionally, the Pool was chosen as one of 15 projects to be exhibited in the American Pavilion at the prestigious 2008 Venice Biennale.