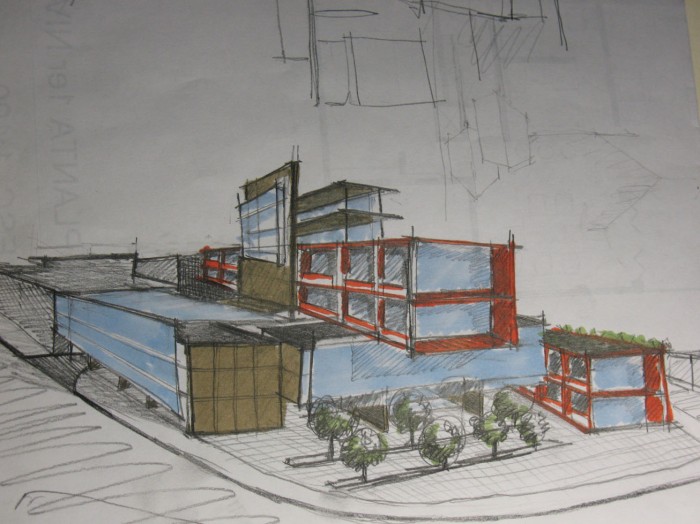 The purpose of the project was to create an office building that would represent the city of Monterrey and Vitro (Glass Company). Monterrey is well known for having a rich industrial past, and this is something that I wanted to express in the building.

The building expresses this value in its architectural language. Having two main languages; the industrial, this represented with metal rusted panels in the fa?ade of two of the volumes. The modern language, which is represented with a double skin curtain wall fa?ade for the other two volumes. Wich are located in the west and south fa?ade.

The creation of this volumes came from the idea of creating un-filled spaces for each building to have a correct demensions for natural light to come in, and use cross ventilation.

The volumes adjacent to the street and on the lower level corresond to offices, the volume perpendicular to ir is the connection between this two and also a place for conference rooms. The upper volume has an auditorium, and a resturant for employees.

The building also want?s to create an urban dialog with its context, a dialog. The building is lifted up from the ground to create a public plaza and has a "comunication" with the adjacent building (MARCO by Ricardo Legorreta) as it appears to be extruded from it, and the service tower, has a visual connection with the "Commerce Lighthouse" by Luis Barragan. The functionality of the building also helped to assemble the volumes, each volume has a functionality connection with each other. The cantilever adds to the idea of having a innovative structural building in the city.

Proyecting an horizontal building came with the idea of repecting the urban context, as the city's skyline lowers itslef as it aproaches the "old city neighborhood".

The main idea of the project is to add another layer of architectural culture to the city.