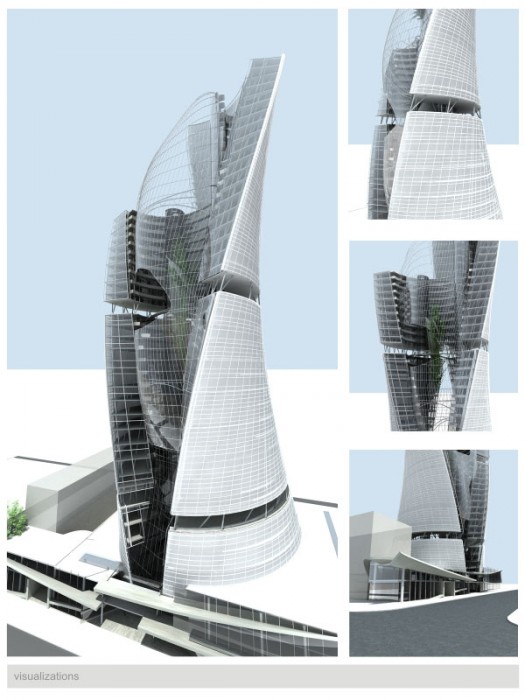 Project of a Hotel

The main idea of this project is aesthetics of the form which expresses mentality of people, living in the same environment, where the building is. The project of this buildingr created for the specific urban environment, but the main principle of it, can be used in any other place. The principle is that all the parts of the building should only give aesthetic satisfaction, and all the exterior and interior views should be presented in such a couscous way, that they give only positive feelings to the people. People must move inside of the building through those ways which are intended to be used by the architect.

The project of a hotel, with a small multifunctional complex inside, is created for the city of Yerevan, Armenia. It is located on the crossroads of Abovyan and Sayat Nova Streets. The architecture of urban environment of this part of the city created in the Soviet Union times and it mainly consists of 5 floor buildings, made of stone and engravments on the facades, as well as 12-16 floor buildings with standard plans. Those 5 floor buildings are shown as grey prisms in the viusalizations. In those buildings block, there is another hotel with a standard look of a Soviet building, and with a standard not an aesthetic planning. On the other side of Abovyan Street, there is a Church Cathedral in a small park,.

As you can see in the photos, at the lower levels of this part of the city, there are not interesting and beautiful views, and basically the geometry of the form of the building is created in a special way. The ground floors have views to the inside of the building, and the upper floors have views to the city. On the first sketch of the project there are visible main lines of the way which should be used by the growing volume of the building. The second reason of such a form of the building aesthetics is the building?s special silhouette which gives to it a unique character and philosophy. The famous sculptor O. Rodin has modeled sculpture of the French writer Balzac many times, until he had found what he needed and that way of standing (that kind of symbolism of the form) of the sculpture's volume, tells main things about Balzac, and about his character. My building stands in a similar way , because I think such a figure is very relevant to the Armenian deep and emotional philosophy.

Since September of 2009 I'm Postgraduate architecture student in Yerevan State University of Architecture and Construction.
my web-site: www.vahan-architecture.com
my email: [email protected]