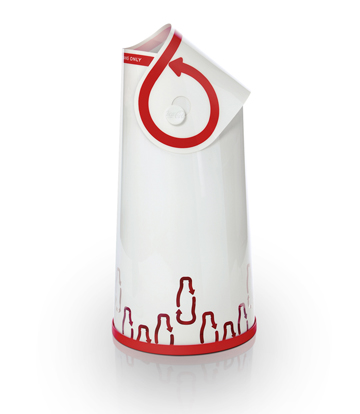 The Coca-Cola Refresh Recycling Bin is an innovative step towards solving the problem of trash and recycling that is so prevalent in current society. The challenge was to design a recycling bin that could be shipped flat to Coca Cola?s various industrial facilities and large vendors (Target, Wal-Mart, etc.), manufactured from 100% recycled PET and would promote Coca Cola?s recycling efforts. The Refresh Recycling Bin was launched on ?World Recycling Day 2007? and is part of Coca-Cola?s broader effort to become the global leader in PET recycling.

While metropolitan recycling programs are on the rise, much of the U.S. (particularly in small towns and rural areas) is still without curbside recycling service such as Wal-Mart and Target stores nationwide. The Refresh Recycling Bin attempts to make recycling more convenient in these areas by placing these highly visible and engaging bins in high-traffic destinations.

The design challenge was to create a bin that would be iconic and welcoming to the user, without trying too hard. Often traditional bins are overly cheesy or cartoonish, like a large Coke bottle to throw your coke bottles into. The design of this bin would focus on minimal and clean lines that would not put off the user.

Unlike traditional recycling bins, the Refresh Recycling Bin has a friendly posture that reaches out to the user. This unique profile combined with the bold use of color and modern graphic treatment aims to draw the attention and encourage frequent, habitual use. The fabrication of the Refresh Recycling Bin is remarkably simple. The design is made from a single piece of sheet material die-cut into an inner and outer shell (the most readily available form of RPET), a simple molded base, and a set of plastic snaps. It is unique because it not only encourages people to recycle, it also showcases the exceptional design potential of recycled plastic. Its simple components pack flat for shipping and require very little energy to create, transport and assemble.

There are not enough uses for recycled PET soda bottles, tens of millions of which are thrown away each day in the US alone. Thus, it was quintessential to create a simple clean design, which could be easily made from RPET, encouraging a manufacturer to use RPET rather than another material. The bin is also shipped flat to be assembled on site. This efficient design increases the number of bins that fit on a truck, thereby saving time, fuel, and energy. Once delivered to its destination, the simple construction snaps together in minutes.

This product combines a green philosophy, green manufacturing, shipping and assembly. The basic tenant behind this product is to raise awareness about sustainability as well as to practice what is being asked of the user. In order to promote the idea of recycling, the product must reflect the same philosophy, something that is achieved on a tremendous scale with the Refresh Bin. It assists with reuse; by using a readily available recycled resource and employs a design that is welcoming to the user. From beginning to end, this product achieves a high level of environmental design and implementation, which will ultimately encourage the consumer to do the same.