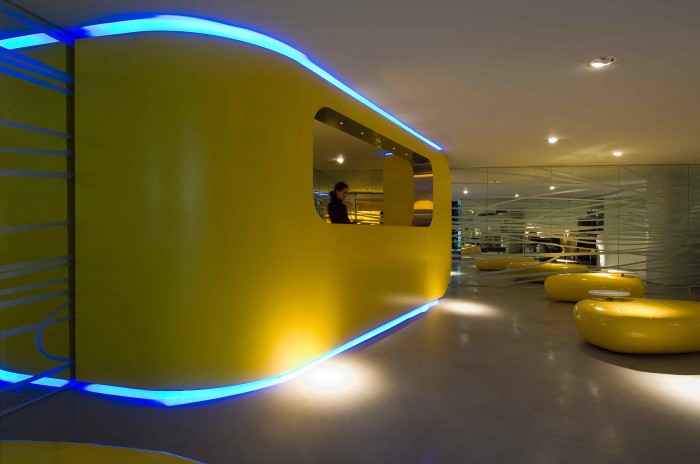 IAT
The Tourist Information Office (IAT) in Piazza Duomo is in the former Albergo Diurno, designed and built by Bolognese engineer Cleopatro Cobianchi in 1924, in an underground
section between the main square and the Vittorio Emanuele Gallery. An area of 1,500 m2, also featuring ruins from the Roman empire, which already underwent reconstruction in
2003; however, one part was retained in Liberty and Deco style, which now houses (and will continue to house) the IAT desks run by the Province of Milan. Every day hundreds of
citizens and tourists come here to ask for information about the city of Milan and its surrounding area: cultural initiatives, social and sporting events, concerts, art exhibitions, food and wine events, trade fairs. All this information is provided in various forms, but pride of place is held by the monthly magazine, issued by the Tourism Sector editing team, Milano Mese, which includes a full English translation. The magazine?s database is an important source of material for our new portal (www.visitamilano.it), which is also kept up-to-date with information supplied by local organisations (municipal councils, tourist offices, etc,). The current reconstruction, directed by architect Simone Micheli, will give yet another face to the Cobianchi. One part will keep the old style and will remain an information desk for the public. The modern section becames a new icon for the city of Milan. A place with
excellent reception and tourist promotion, vernissage and conference facilities, with multiple information channels, in paper and audiovisual format, displayed on 12 monitors, audioguides that can be downloaded directly onto mobile phone via Blue Tooth, and a virtual tourist assistant, the state of the art in technology. This place will enable the various
parties working in the tourist sector in Italy (Regional, Provincial, Municipal councils, etc) to demonstrate their excellence through this wonderful and rare showcase in the heart of Milan, through the organisation of events, exhibitions, presentations and meetings.


The genesis of the project
The Milan Tourist Point which is considered as a part of the urban space has become the living proof of a new way of improving pre-existent urban works (interior design and
architecture) by means of well planned projects and thanks to the contribution of the Italian industry. This project which was conceived and carried out by the Architect Micheli was financed by major Italian enterprises and donated to Milano Metropoli for the province and the municipality of Milan. A part of this space will be inaugurated during the crucial period in which the Milan Furniture Fair scheduled in April 2008, when simultaneously many ?Fuori Salone? will take place and it will be the result of a project which is very rich in contents and materials. During the week of the Milan Furniture Fair Italian enterprises invest heavily in important installations which unluckily turn out to be short- lived. The idea of Architect Micheli, which is supported by Antonio Oliverio (Councillor for General Affairs, Tourism and Fashion of the Province of Milan) by Massimiliano Orsatti (Councillor for Tourism, Territorial marketing and Identity of the Municipality of Milan) and by the Milano Metropoli Development Agency consists in using the cultural and economical resources resulting from this yearly meeting in the best possible way in order to create smart ,ethical and up-to-date urban works which should be able to improve the overall urban environment of people by means of distinguished signs. In this way, the project intervention which is known as? New Urban Face? which has been carried out within the Milan Tourist Point- IAT Spazio Ex Cobianchi located in Piazza Duomo in Milan represents a milestone in its field. In this way, the Tourist Point of Milan will become the symbol of a new way of creating of several high- quality urban spaces in order to shed a new light on the city heritage in the near future. By following this lines the Milan Tourist Point will become a crucial point during the Week of Design in April 2008, which will gather the Universities and schools in Milan related to the urban art by means of videos dealing with this subject. People will convene this place in order to celebrate an history of architecture rich in intelligence and to exchange ideas. The aim consists in giving birth to a place with avant-garde features which is made up of a mixture of present and future showing a balanced view of Architecture, fashion, design, culture and human relationships. This place should celebrate research and experimentation towards evolution and represent a manifesto of a better future. The ultimate goal is drawing the attention of those who are very keen on the future Architecture and that of those young belonging to the fashion, design and cultural schools of Milan who follow original paths aiming at discovering new cultural and economical borders. The purpose of this work lies in defining the features of a real three- dimensional manifesto which is able to express the intellectual and physical lineaments of this era. This installation should represent a temporary urban living room fostering human relationship and the exchanging of ideas. After the Week of Design the Tourist Point may be used as an interactive environment for showing the most attractive treasures of Milan beside preserving its outstanding value intact.


The story of the space
The work of renovation carried out by the Architect Micheli followed his usual modus operandi, which consists in triggering an osmotic dissonance with the pre-existent work. The following statement helps clarify the actual contents of this project: ?I imagine the city as a sheet of paper which collects texts, stories and words written by each individual resulting in a unexpected scenery which appears to be assonant for it is the result of the mixtures of contrasting voices! Each historic period left indelible marks on the architecture which manifest themselves openly by means of opposing or adhering to the existent status. When entering the Milan Tourist Point visitor?s attention is drawn by the grace of the variable geometry and by the variety of images. My project is aimed at expressing contents rich in contemporary features in order to define an architectural area promoting encounters and knowledge. I intend this area to become a urban focus enabling visitors who looks for information to discover the city and outskirts hidden treasure embracing past, present and future. In this place which is functional, flexible and spectacular uniqueness is to be celebrated by means of virtual and real proposals. This area is a piece of work which enable us to imagine another possible future and where people are provided information, where learning and communication find fertile ground.
On the one hand, the challenge for the future lies in increasing our planning, technical and scientific knowledge focusing on moral and spiritual issues in order to create memorable pieces of work. On the other hand the challenge for the present lies in building a
tremendous future to be monitored by means of a fair ethic, intelligence and by the intention of giving extraordinary answers to the issues the future raises. That?s the very meaning of Milan Tourist
Point!?.This space features few but really effective details: the wide silvery floor, the snow-white curvilinear floor layout, the smooth white columns resembling totem poles, the textile ceiling lamps with illuminating colour changing bodies, the gigantic frame acting both as a catering counter and as a reception desk, the wide and fancy walls which are covered by silk screened mirrors having wide video screens within, the properly focused built-in ceiling illuminating bodies, the bewitching glass and iron flooring not to hinder the sight of the roman excavation, the yellow rupestral seatings that together with essential designed mobile furniture and several circular mirrors which are dispersed over the assembly hall complete the overall picture of this place. The purpose of this work lies in defining the
features of a real three-dimensional metropolitan manifesto of architecture which is able to draw the attention of the visitor-guest making him part of a unique and meaningful space. The above mentioned philosophy materialized by avoiding any static element where the visitor can take advantage of the contents provided bythis area. The words of the Architect Micheli suggest the guidelines of this three-dimensional work: ?The rapid and continuous evolution of all the systems, the constant research related to evolution, the communication and the discipline hybridazation will keep on producing increasingly complex dreams being the result of the interaction between drawing, scientific findings, technology and social changes. Planning related research will be more and more made of perceptive structures, intelligent sensorial microclimates leading to an abstract immaterial reality offering a wide variety of functions and information. Future architecture will increasingly become object or a reversible and agile system which is required to adapt the dizzy changing of all the scenarios in order to convert into different species of objects and systems. Architecture will
increasingly develop into an aggregate of artificial or natural matter which ceases to exist without human help. Being receptive to the diversity that influences our decisions and our dreams, it will heighten our awareness and it will arise the need of finding more complex, anomalous, weird and inconceivables solutions. Symbols and images belonging to different fields will be synthesized and processed in order to become part of our vocabulary which will remain personal and radical. The continuous planning and technologic search will give birth to new hyperbolic solutions sharing the same topic: altering the real known to determine planets where we may perform our rituals and take our actions. That?s what the Milan Tourist Point is about!?.

Simone Micheli is a Professor. He founded the architectural studio with his name in 1990
and the Design Company ?Simone Micheli Architectural Hero? in 2003. His works
concerning architecture, contract, interior design, exhibit design, design, graphic and
communication are strictly linked to the sensorial glorification. He is the curator of some
experimental events for some of the most qualified international fairs.
He shows his projects in the most important world-wide architecture and design
exhibitions. Several monographies and publications about his works are published in the
most important international magazines and books.