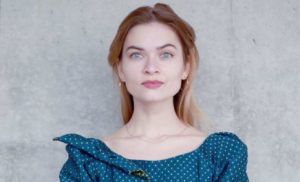 You were born and raised in a small town in the Southern part of Russia. Tell us what that was like.It was the dashing time of the 90s, but my childhood was calm, thoughtful, contemplative and a little isolated from anything amazing. I spent a lot of the time being alone playing on my own since there were no kids of my age on our street. I was close to nature; our house had a garden where I spent much time among warm summer fruits and berries, plants and bees. My small town didn’t have anything spectacular or visually stimulating. Maybe because of that, when I got a chance to see any man-made beauty it affected me deeply.

My parents gave me all the warmth of genuine love. Maybe it was them who passed on to me the ability to be fascinated–the most important quality of artist, I believe. At the same time, they provided me with the safe environment where I got my strong self-confidence. I didn’t know when that seed first emerged but always seemed to always know that I would be an artist. I didn’t learn the word “designer” till much later, 10th grade. Yes, it was that exotic time of lack of progressive information.

You are now based in Vancouver, Canada. When did you move there and have there been any challenges in adjusting to your new home?

I have quite a nomadic life. It was a series of moves, first to one of the biggest Russian cities, then to USA, then to Canada and now I’m back to the US again. Moving and adaptation is my constant state.

I’d say that wasn’t cultural shock but rather cultural fascination. I like noticing all the differences, people, manners, norms, different ways to live

The biggest difference between Russia and America to me is predictability. Russia, from the very little things to major concepts, is unpredictable, it functions every time in a different way, everything is full of manner mystique and second meaning. Both in a good and in a bad way. In America everyhting is determined as in a well working clock. Every thing, feeling or situation has it’s stable name and algorithm of interaction.

How do you think Russian culture and mentality shaped your personal and professional vision?

I love to be “two brained” and having these two very different perspectives, having both my national and international mentality. It’s like being able to embrace, to cover, a larger part of multifaceted reality. But it has its price. I acknowledge I’ll probably never be fully accepted by hte Western world, never get those deep local secrets of the places which I pass through.

What were the main challenges for you in creating your professional path in a different country?

I don’t identify my professional path in design by my location. It’s united and its challenges are the same no matter where I am. I’d only say it’s more interesting to act and create in a new environment.

The challenges I currently face regarding geography is how to merge the very highest goal in art with commercial activity, how to the most subjective free artist and at the same time be successful in this industry

Your slogan is “save soul and protect body”. Can you please elaborate on the philosophy behind it?

Two things come to mind. First, I don’t like when people die, and second, I don’t like when the soul is neglected. So I try to contradict these two concepts by designing things that could either protect the fragility of human beings or nourish the soul. I love the idea that a human being should live at least a hundred beautiful happy years, both long and emotionally stimulating.

To me, everything starts from a healthy soul, and art that has a miraculous ability to liven up souls and touch hearts. To me it is saving the soul. Through my art and design I do what I feel from the inside. My process itself is a catharsis for me. I turn humanistic ideas into visual metaphors that I implement in my products.

My Sweater for People with Flaming Hearts is an example. Its knitting pattern depicts a body temperature chart with the hottest area at the chest, so that a flaming heart becomes visible. I launched the sweaters production by pre-orders and saw how sacred it was for people who bought it: one put it on when they composed music, another one has it on her artistic group profile picture, and another posed in it for a conceptual family portrait.

The second direction of my work is to “Protect body”, striving to solve real-life problems. By “body” I mean both physical lives and the natural environment. My work in this direction is the Reusable Multilayer Plate “Ox-Eye” that doesn’t need to be washed. You do not have to wash this plate every time after a meal; just take away the dirty upper layer. The disposal is minimum in this case unlike disposable plastic plates that everybody is used to. It consists of a plate-foundation (laminated cardboard) and layers of biodegradable coating (peptidic films).

An ideal design that “saves soul and protects body” would be something like a miraculous omnipotent that solves all existing suffering and heals every disease.

Your winning project with Valery Graznov was the Uslon Life-Saving Swimwear. Its’ main feature is its ability to keep the body afloat thanks to tiny air-capsules. It looks like a regular swimsuit but works as a life vest. How did you come up with the idea? What are the main strengths of the design?

The author of the idea of Uslon lifesaving Swimwear is my partner, a scientist, Valery Graznov. There is one idea that bothered him for years – which is that no one should ever drown. There was a solution within the problem, that someone can be saved by their clothes. This idea came up after reading Alain Bombard’ s book “The Voyage of the Heretique”, who is famous for sailing across the Atlantic Ocean in a small boat without special equipment.

The main strength of the design (I hope) is an impression that these principal floatation elements are just authentic decorative zest of the swimwear’s design.

What does this award mean to you, and how did it help your career?

It’s like proof that a depressed woman on maternity leave is able to get two Gold Awards and the Design of the Year title in one competition.

Where do you get motivation and inspiration from for your work? How do you decide to take on certain projects?

My motivation is my passion for design. It’s my nature. Currently I’m inspired by the trivial and mundane routine, by underestimated things, by things that are cheap, excessive, even too gross or banned by high culture and are opposite to sleek design. It’s the realm of vivid and genuine naturalistic reality. And definitely it’s all anti-aesthetical, like a cheap, terrible quality, tasteless dress from a street market, like unpretentious YouTube recipes from some poor women from an isolated town who is ironically bad at cooking.

I take a project if I feel it’ll be honest to my inner self.

What do you think are the biggest challenges and opportunities in your career now?

The biggest challenge to me now is to fully embrace the idea that I can totally merge my independent true artistic works with commercial projects so I won’t distinguish between work “for client” and work “for soul”. They should be one, like genuine life shouldn’t be divided into “work” and “leisure”.

The opportunities I feel come from novelty of design niches; that is where I’m coming in. From the boldness to go in there and from the move–I’m moving to Chicago, which to me is a more passionate city than Vancouver.

What are you working on at the moment? What is in the pipeline for you?

I am doing a series of digital artworks now. I like to switch between all-thought designs to unconscious art. I have a busy period in life and then a wild, free period of expression that I realize through my 3d digital painting. This is the best and the most honest thing I can do to harmonize my mind.